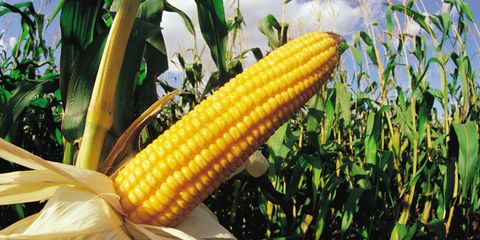 Last Thursday, May 30, 2019, President Trump, in hopes of curbing illegal immigration, announced his intentions to impose new tariffs on imports from Mexico.

The following day, the Trump Administration’s Environmental Protection Agency announced that they were suspending the annual June 1 – September 15 ban of “E-15” fuel, which contains 15 percent ethanol and 85 percent gasoline. 15% ethanol is currently the highest ethanol level available at most gas stations.

The two actions by the Trump Administration were both taken with the US corn industry very much in mind.  Consider the following.

Ethanol as Fuel Additive.  Ethanol is ethyl alcohol (aka ‘grain alcohol’), the same type of alcohol in alcoholic beverages.  It is made by fermenting sugar with yeast and in its pure form it is highly combustible.

After the advent of the automobile and the widespread use of gasoline in internal combustion engines, it was discovered that ethanol was an effective agent to increase the octane levels of gasoline.  Insufficient octane causes irregular combustion within the engine, leading to a formerly common phenomenon known as ‘knocking’ – the rapid thuds of misfiring pistons.

Lead compounds were originally used by the gasoline industry to improve octane levels.  As the public became more informed and demanding with respect to the environment, the toxicity of leaded gasoline became unacceptable.

In the US, ethanol was a particularly attractive substitute to lead compounds as a fuel additive because ethanol can be made from corn sugar and the US is the biggest corn producer in the world.  In addition, because the underlying corn sugar comes from a carbon dioxide producing plant, the product is relatively ‘green’ and renewable as compared to petrochemical alternatives.

Summertime Ban of E-15.  The summertime ban of E-15 fuel had only been in place since 2011. The logic of the ban is that, according to some authorities, higher ethanol exhaust levels during warm weather leads to higher smog levels.

Further, ethanol is cheaper to produce than gasoline and E-15 is generally 5 to 10 cents cheaper per gallon than E-10.  Over the course of a summer, these savings could be meaningful to many motorists.

Mexico.  As seen in the table below, Mexico is the largest export market for U.S. corn. 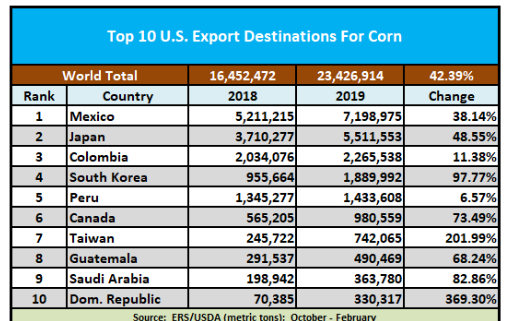 Imposing tariffs on imports from Mexico increases the probability that Mexico will impose tariffs on goods from the U.S., including corn, which would make these US products marginally less competitive in Mexico.

Lifting the summertime ban on E-15 was not ostensibly tied to the talk of tariffs on Mexico, but common sense indicates that the timing of the two announcements was not coincidental.

A Long, Wet Winter.  The major agricultural sectors of the US have endured one of the coldest, wettest and longest winters on record.  Historically U.S. agriculture has been remarkably adept at hitting the tightest planting windows that Mother Nature allows. This year, however, many U.S. growers have simply run out of time.  The end of May is a common deadline for planting with respect to crop insurance and ‘prevented planting’ acres will be near record highs for the corn market.

The talk of tariffs on Mexico last week provoked an immediate response in the corn futures market, with prices gapping higher.  While high prices are ordinarily a good thing, this price action was more driven by problems on the supply side than increased demand.  Higher probability of weaker demand from Mexico could result in some corn growers deciding to plant even less corn than weather conditions permit.  This would add another negative to an already discouraging outlook for the gross revenue of corn growers.