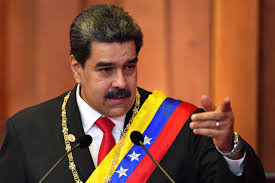 Venezuelan President Nicolás Maduro is discovering, to paraphrase Margaret Thatcher, the problem with a kleptocracy is that you eventually run out of other people’s money to steal.

After decades of crony capitalism and state-sponsored looting, money is so tight for Maduro that he is no longer able to pay Russia to provide top of the line military equipment and advice.

On Sunday, June 2, the Wall St. Journal reported that Russian state defense contractor Rostec had cut its staff in Venezuela to just a few dozen, from about 1,000 a few years ago.

Neither Russia nor Venezuela has commented on the situation.  But according to the Journal report, Russia’s decision to minimize its activities in Venezuela is economic; Maduro simply can no longer foot the bill.

Russia’s withdrawal hurts Maduro’s ability to perpetuate his dictatorship through military force and is a public relations nightmare for him because he (and his predecessor Hugo Chavez) has frequently pointed to support from Russia as a sign that other global powers are willing to assist him in his standoff against the U.S.  Conversely it shows that the U.S. sanctions are having the desired effect.

Russia-Venezuela defense ties flourished under Hugo Chávez. Venezuela bought rifle factories, state of the art aircraft and tanks, as well as various anti-aerial defense systems.  Not only were these large ticket purchases, but they also entailed expensive training and maintenance contracts.

And this is the latest in a recent string of instances where U.S. sanctions or pressure have thwarted lucrative arms sales and diminished the scope of Russia’s global strategic influence.  Kuwait, Indonesia and the Philippines have all recently cancelled planned large purchases of military hardware from Russia due to pressure from the U.S.

The Kremlin was particularly keen on Venezuela due to its proximity to the US.  Russia believes that the US has historically been unreasonably meddlesome in the politics of nations close to Russia’s borders, including recently in countries that had been part of the former Soviet Union, such as Georgia and Ukraine.

Earlier this year, Mr. Maduro had decided to flee Venezuela but he was persuaded to stay by Russia.  In a show of support, Russia sent one of their chief military officers to Caracas, accompanied by plane loads of specialists and 35 tons of expensive hardware.   But apparently this has proved to be a last-ditch effort that failed.  According to the Journal, by the end of last year, Maduro had already defaulted on contracts with the Russians.  Now the situation has not improved and Russia believes that Maduro’s tenuous hold on power makes him a bad financial risk.

Russia cannot completely wash its hands of Venezuela because Venezuela is the largest foreign recipient of investments by Russian oil giant Rosneft.  These are long-term investments and Russia is not wealthy enough to write these investments off without pain.

Maduro’s loss of his Russian muscle is part of an ongoing collapse of what is referred to for want of a better term as ‘Chavismo’, Hugo Chavez’s ambition to recreate Venezuela as a petro-powered socialist nation that would provide a geopolitical counterweight to the influence of the US in Latin America.

Recent events have shown, however, that in practice ‘chavismo’ ideals could not overcome the real-world temptations of money and power.  PDVSA, the Venezuelan national oil company, through its affiliate Petrocaribe, has now become the focal point of several bitter corruption scandals in the region.

In Haiti, a Haitian Senate probe found that private sector leaders and former government officials embezzled $2 billion in proceeds from Petrocaribe that were earmarked for disaster relief. Haitians launched the social media campaign #petrocaribechallenge to ask where the money went and took to the streets in a series of violent protests to demand the resignation of President Jovenel Moïse.

According to the respected academic journal America’s Quarterly, Daniel Ortega’s government in Nicaragua has used the opaque joint venture Albanisa (51% controlled by PDVSA, 49% by PetroNic) to distribute a reported $4 billion to Sandinista loyalists since 2007.

In El Salvador, Alba Petróleos (60% owned by PDVSA and 40% owned by local politicians and Albanisa) was sanctioned for corruption by the Treasury Department in January 2019 for funding political campaigns.

Meanwhile, the US government, in the federal courts of Houston and Miami, has prosecuted and continues to prosecute both US and international financiers for illegally laundering Venezuelan oil revenue.  These prosecutions will be the subject of articles in the near future.