New Survey: 40% of voters believe ‘THE SQUAD’ represents the Dems 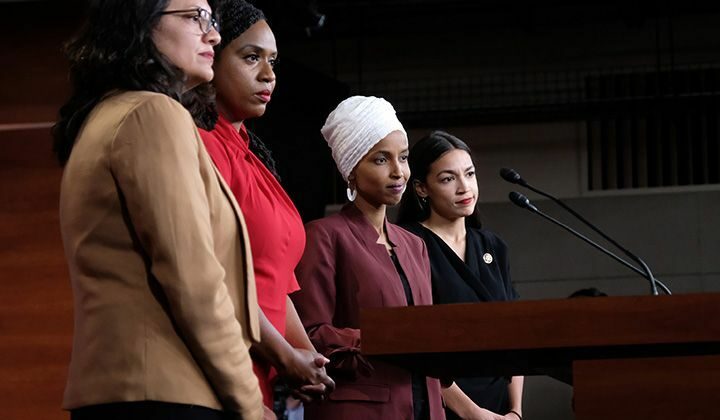 Regardless of how House Speaker Nancy Pelosi attempts to downplay the significance of the four extreme freshmen known as “THE SQUAD” one thing is certain they’re having an impact on the party, moreover with registered voters, which can’t be a good thing going into the 2020 election cycle.

According to a new survey conducted by The Morning Consult Analysis, 40% of registered voters believe “THE SQUAD”  comprised of the four freshmen lawmakers, Reps. Alexandria Ocasio-Cortez (D-NY), Ilhan Omar (D-MN), Rashida Tlaib (D-MI), and Ayanna Pressley (D-MA) represent the views of Democrats in Washington, while 58% believe that  House Speaker Nancy Pelosi represents the views of Democrats in Washington.

According to a spokesman for the survey, “it might be prudent for Democrats to distance themselves” from the four extremist lawmakers, who’ve been in Washington less than seven months.

Which Republicans view as a unique opportunity to paint “THE SQUAD” as the new face of the Democratic Party ahead of the 2020 election.

National Republican Congressional Committee Chairman Tom Emmer sat down with reporters recently in Washington to discuss how Republicans plan to use the growing divide between the progressive/moderate wing of the Democratic Party and those four extremists who take up most of the media’s attention.

Emmer’s strategy is quite simple, thanks in part to the four publicity-seeking freshmen who usually dominate the 24/7 news cycle with their antics. If it’s not Ocasio-Cortez talking about “concentration camps” it’s Omar referencing “white men” as “terrorists.”

This plays right into Emmer’s playbook for taking back the House, by framing the 2020 election as a “choice between socialism and freedom,” and dubbed House Democrats as the “new Red Army of socialists.”

Much like the President’s repeated attacks on the four far, far left congresswomen, framing them as the face of the Democratic Party, Emmer is also elevating “THE SQUAD” as the new voice of the Democratic Party calling for the elimination of Home Land Security, open borders, free healthcare for illegal aliens, repealing the Presidents tax cuts, along with a number of far left programs.

“It’s my strong belief that voters want nothing to do with this agenda — this socialist agenda,” Emmer said at a July 18th  breakfast, criticizing policies such as “Medicare for All” and the Green New Deal that are being pushed by House progressives and some of the Democratic presidential contenders.

Moreover, according to yet another poll by the Morning Consult/Politico, 28% of voters nationwide said their feelings about “socialism” will impact how they vote “a lot” next year.

However a share of Republican voters, who said they were thinking a lot about socialism when it comes to their 2020 vote, dropped 12%, from 49% to 37%, which perhaps suggests their confidence level, regarding the President’s reelection

The national strategy for the 2020 Trump Campaign is to highlight the Presidents economic successes of lower taxes, less putative regulations for businesses, fair and equitable trade agreements with foreign governments, a strong military and of course a strong immigration policy, compared to a socialistic agenda being pushed by the four radical freshmen, which is fast  becoming a part of the official 2020 Democratic Platform, as almost every candidate has now signed on in favor of free healthcare for all illegal aliens.

Democratic Congressional Campaign Committee Chairwoman Cheri Bustos (D-Ill.), said in an interview that there’s not much she can do about her party’s presidential contest potentially turning off the voters. Stating that House Democrats need to help protect their majority.

Ilhan Omar: ‘Our Country Should Be More Fearful of White Men’