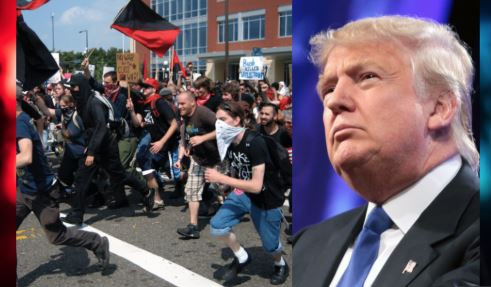 On Saturday, President Donald Trump took to Twitter to voice his support for labeling the far-left anarchist group Antifa a terrorist organization. He also deemed the group a collection of “gutless radical left wack jobs.”

“Consideration is being given to declaring ANTIFA, the gutless Radical Left Wack Jobs who go around hitting (only non-fighters) people over the heads with baseball bats, a major Organization of Terror (along with MS-13 & others),” President Trump tweeted, adding that it “would make it easier for police to do their job!”

Although no one knows for sure what exactly motivated Trump’s comments, they appear to implicitly reference a bill that was proposed earlier in the month by Texas Republican Senator Ted Cruz and Louisiana Republican Senator Bill Cassidy, that if passed, would have Antifa labeled as a terrorist group.

When first announcing the bill on July 19, Senator Cruz declared, “Antifa is a terrorist organization composed of hateful, intolerant radicals who pursue their extreme agenda through aggressive violence.”

The bill proposed by Cruz and Cassidy came in response to an attack on journalist Andy Ngo by members of the extreme-left group at a Portland protest on June 29th. Mr. Ngo is a contributor at the Wall Street Journal and an editor at the online magazine Quillette who has covered the Antifa movement extensively.

At the Portland protest on the 29th of June, Ngo had his camera equipment stolen, had unknown liquids thrown on him, and was repeatedly battered by Antifa activists. Ngo was forced to visit the hospital for a head injury as a result of the assault which was caught on tape.

Last September, while eating at a Washington D.C. restaurant with his wife, Senator Cruz was also assailed by Antifa members. The extremists chased the couple out of the restaurant and later tweeted a warning to the Republican Senator that he was “not safe”