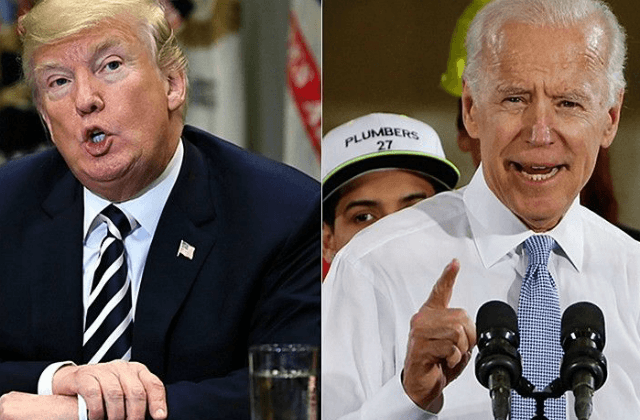 In no uncertain terms, Former Vice President Joe Biden has blamed President Trump for the tragic shooting in El Paso.

In what could only be characterized as a campaign speech laced with fire and fury, the 2020 Democratic front runner laced into the President.

In a speech he gave late Wednesday afternoon, Biden said that Trump has “fanned the flames of white supremacy in this nation,” obviously attempting to directly link the President to the mass shooting in El Paso, Texas.

“The danger that Donald Trump and the alt-right pose to this nation isn’t hypothetical,” Biden added.

The charges voiced by the former Vice President, came during a stump speech at the same time that Trump was winging his way to El Paso to visit with law enforcement, first responders and victims of the shooting, which left at least 22 people dead. This was after the President had already stopped in Dayton, Ohio, the site of another mass shooting this past weekend.

While law enforcement says the motivation for the Ohio shooting remains unclear, the suspect in the El Paso massacre allegedly wrote a white nationalist manifesto ahead of the shootings.

Biden, pointing to the President’s divisive immigration rhetoric at campaign rallies and on Twitter, asked “how far is it from Trump’s saying this ‘is an invasion’ to the shooter in El Paso declaring ‘his attack is a response to the Hispanic invasion of Texas?’”

Answering his own question, the former Vice President said “not far at all.”

And he charged that “in both clear language and in code, this president has fanned the flames of white supremacy in this nation.”

Biden’s comments leveled at the President should come as no surprise. He and other prominent Democrats have been hurling similar barbs at Trump since the shootings occurred. This despite the Presidents condemnation of white supremacy and calls for unity.

But Trump has hit back, arguing that his critics have ignored the Dayton shooter’s apparent liberal views.

“They’re trying to make political points,” he said Wednesday of his critics.

And asked specifically about Biden’s prior comments to today’s speech where the former Veep called Trump “incompetent,” Trump said, “Joe Biden has truly lost his fastball, that I can tell you.”

During Biden’s speech, Trump live tweeted, “Watching Sleepy Joe Biden making a speech. Sooo Boring! The LameStream Media will die in the ratings and clicks with this guy. It will be over for them, not to mention the fact that our Country will do poorly with him. It will be one big crash, but at least China will be happy!”

Trump Vows to Crack Down on Social Media Bias