The Next Clinton Kill? Time to Investigate 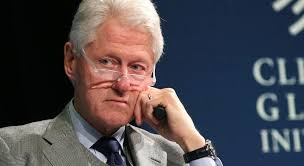 In the wake of the controversial death of tarnished billionaire and accused sex-trafficker, Jeffrey Epstein, Attorney General William Barr said Saturday that he is “appalled”  – and that he has spoken to the Department of Justice’s inspector general about opening a probe into the circumstances surrounding the apparent suicide.

“I was appalled to learn that Jeffrey Epstein was found dead early this morning from an apparent suicide while in federal custody. Mr. Epstein’s death raises serious questions that must be answered. In addition to the FBI’s investigation, I have consulted with the Inspector General who is opening an investigation into the circumstances of Mr. Epstein’s death.”

Epstein, a proved pedophile who was accused of sex trafficking minors, was found unresponsive inside his cell at the Metropolitan Correctional Center in New York City around 6:30 a.m. on Saturday June 10.

According to the Associated Press, life-saving measures were initiated immediately by responding staff. He was transported to New York Presbyterian-Lower Manhattan Hospital and was dead on arrival.

The New York City medical examiner’s office told Fox News that an autopsy is pending to determine the cause of death. However, the death comes two weeks after the 66-year-old was placed on suicide watch after being found injured in his cell. Epstein was in his own cell at the time of his death and was no longer on suicide watch, according to the Associated Press.

“To those brave young women who have already come forward and to the many others who have yet to do so, let me reiterate that we remain committed to standing for you, and our investigation of the conduct charged in the Indictment – which included a conspiracy count – remains ongoing,” Berman said in a statement.

Many Want Answers Regarding Epstein’s “Sucide”

Epstein’s death sparked calls for answers from across the political spectrum. Rep. Alexandria Ocasio-Cortez, D-N.Y., tweeted that “we need answers, and lots of them.” Sen. Kirsten Gillibrand, D-N.Y., said in Iowa that the circumstances surrounding Epstein’s death should be “reviewed.”

Rep. Matt Gaetz, R-Fla., tweeted he agreed with AOC, tweeting, “Chairman @RepJerryNadler should prioritize a Judiciary investigation into how Jeffrey Epstein died in federal custody (in Nadler’s own neighborhood!) over the Kavanaugh confirmation (which already happened), and the Russia hoax (which never happened).”

Nadler tweeted that he was “deeply disturbed” at Epstein’s death and was “pleased” the Justice Department and FBI would be looking into the matter.

“There are many questions that need to be answered in this case,” the House Judiciary Committee chair added.

Sen. Ben Sasse, R-Neb., said that it was “inexcusable” that Epstein was not under constant suicide watch, “These victims deserved to face their serial abuser in court,” he said.

In a separate letter to Barr, Sasse demanded a Justice Department investigation of Epstein’s death.

“The Department of Justice failed, and today Jeffrey Epstein’s co-conspirators think they might have just gotten one last sweetheart deal,” Sasse wrote. “Every single person in the Justice Department — from your Main Justice headquarters staff all the way to the night-shift jailer — knew that this man was a suicide risk, and that his dark secrets couldn’t be allowed to die with him. Given Epstein’s previous attempted suicide, he should have been locked in a padded room under unbroken, 24/7, constant surveillance. Obviously, heads must roll.”

Meanwhile, Sen. Rick Scott, R-Fla., said that the Federal Bureau of Prisons “must provide answers on what systemic failures of the MCC Manhattan or criminal acts allowed this coward to deny justice to his victims.”

The accused pedophile’s death comes a day after thousands of documents were unsealed August 9, in connection with a defamation cause against his alleged recruiter that revealed dozens of high-profile names including former Maine Sen. George Mitchell and ex-New Mexico Gov. Bill Richardson. Both men called the allegations false.

Is Jeffrey Epstein Even Dead?