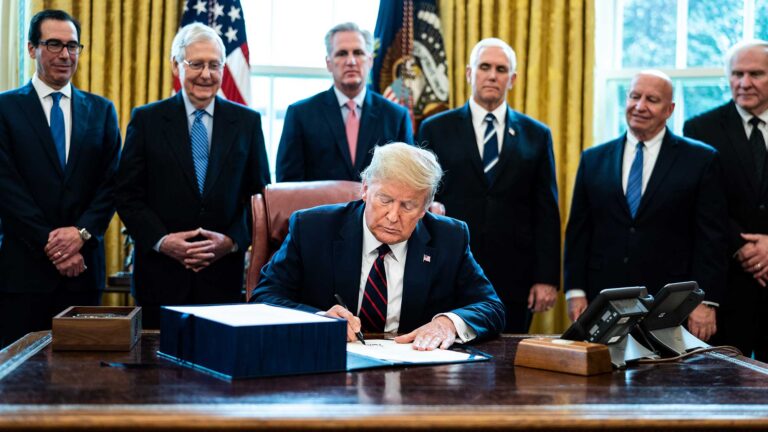 The President has just signed into law, the $2 trillion coronavirus stimulus package, known as the CARES Act.

The historic legislation addresses the most serious of the economic and health consequences of the coronavirus outbreak, with a huge injection of federal dollars and lending capacity.

The 880-page legislation is the largest economic relief bill in U.S. history.

“I just signed the CARES Act, the single biggest economic relief package in American History,” stated the president. “At $2.2 trillion, this bill will deliver urgently-needed relief for our nation’s families, workers, and businesses.”

The President thanked lawmakers on both sides of the aisle for coming together to support citizens across the U.S. during the national emergency.

The act will expand unemployment benefits, provide immediate help for health care providers and other businesses, and will include a onetime payment to the majority of Americans.

The Coronavirus Aid, Relief and Economic Security, or CARES Act, passed the upper chamber of Congress in a unanimous 96-to-zero vote on Wednesday.

“I’m proud to announce tonight not a single senator voted against this $2 trillion rescue bill to save American individuals, small businesses, larger businesses and to provide considerable funding for the health care workers and the scientists and the doctors and others who are trying to solve this pandemic,” stated Senate Majority Leader Mitch McConnell (R-Ky.).

The bill came on the heels of several days of around-the-clock negotiations between Treasury Secretary Steve Mnuchin and Senate leaders of both parties. Once an agreement was reached, the bill was put to a vote in only 20 hours.

The CARES Act mobilizes an unprecedented amount of funds, estimated at $2.2 trillion, to the purpose of revitalizing the economy and shoring up the financial stability of American individuals and businesses. By contrast, the stimulus plan deployed against the 2008 recession cost $700 billion.

The bill will also create a pool of $350 billion for loans to small businesses to cover employee salaries, benefits and prevent lay-offs. It increases unemployment benefits by $600 a week for up to four months, which will be added on top of current benefits granted by individual states.

The measure will also provide an extra $117 billion in funding for hospitals and veterans’ health care. The bill has been celebrated almost universally among major elements of government in both parties.

President Trump fulfilled on his promise to sign the bill into law, as soon as it hit his desk.