She Wanted to Be a Republican President. She’s Voting for Biden 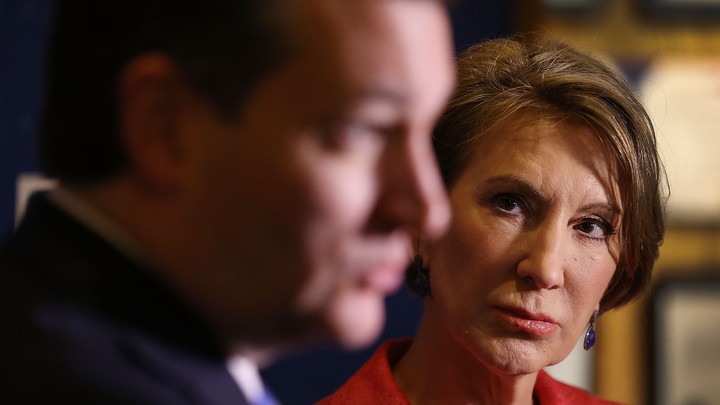 Republicans who say Donald Trump should lose in November but insist they won’t vote for Joe Biden aren’t being honest, Carly Fiorina argues.

Fiorina was a Republican candidate for president just four years ago, and was briefly Ted Cruz’s prospective running mate. Trump needs to go, she says—and that means she’s voting for Biden.

Fiorina is not going to keep quiet, write in another candidate, or vote third-party. “I’ve been very clear that I can’t support Donald Trump,” she told me, in an interview that can be heard in full on the latest episode of The Ticket. “And elections are binary choices.” She struggled with the decision, and whether to go public. But she said that this struggle is one Republicans need to have—including those who have rationalized supporting Trump despite their disagreements, because of some of his policies or judicial appointments.

“As citizens, our vote is more than a check on a box. You know, it’s a statement about where we want to go, and I think what we need now actually is real leadership that can unify the country,” she said. “I am encouraged that Joe Biden is a person of humility and empathy and character. I think he’s demonstrated that through his life. And I think we need humility and empathy everywhere in public life right now. And I think character counts.”

Of course, Trump diehards will dismiss her. She has said over the years that Trump isn’t a real businessman, that he lacks character, that he is the definition of an autocrat, that impeachment was “vital.” But she’s not the stereotype of a Republican squish: Before her 2016 run, she was a Tea Party–type candidate for Senate in 2010 and the CEO of Hewlett-Packard. Four years ago, she voted for Trump—even after he’d been caught saying about her, “Look at that face! Would anyone vote for that? Can you imagine that, the face of our next president?”

Senator Lisa Murkowski of Alaska, who said she agrees with former Defense Secretary James Mattis that Trump is a threat to the Constitution, but is “struggling” with whether to vote for him, is putting politics over principle, Fiorina told me. John Bolton, who has said he hopes for America’s sake that Trump loses but that he’ll write in a conservative Republican, looks to Fiorina like he’s “desperately trying to preserve some position in the Republican Party as a conservative Republican.” As for Cruz, who’s turned into an avid Trump defender—she said she hasn’t spoken with him in years. And Trump, she told me, can tweet whatever he wants about her.

It hasn’t been an easy journey to backing a Democrat, especially when she thinks about issues that she cares deeply about, such as limiting government spending and restricting abortion. But as she’s been working with her Unlocking Potential Foundation, which focuses on increasing diversity among corporate leadership, she’s also been watching how the coronavirus pandemic has exposed inequality in America. She needed to speak up, too. Senators Bernie Sanders and Elizabeth Warren are right, she said: The structures of power have been bent too far toward corporate control. But if conservatives really want to do anything about it, she said, they need to start by standing up for their principles.

Edward-Isaac Dovere: Tom Nichols, the professor and writer who’s a Republican who’s turned on Trump, tweeted a few weeks ago: “I’m not sure who my people are.” With what’s happened with the Republican Party over these past few years, do you know who your people are?

Carly Fiorina: I am a registered Republican. I don’t believe I owe loyalty to a party. I believe I owe loyalty as a citizen to my community, to the Constitution, to other Americans. And I think we have witnessed, particularly in the era of Trump—but prior to that as well— what George Washington warned us about, which is that the trouble with political parties is people will come to care only about winning, and they’ll forget about values and governing. So as I’ve said publicly before, I’m unconcerned about whether I’m a loyal Republican or not, and I’m unconcerned about where “my people” are in a party structure.

When former Defense Secretary Jim Mattis said Trump was a threat to the Constitution, and Lisa Murkowski said she agreed with Mattis but is “struggling” with whether to support Trump, do you understand that struggle?

Dovere: Have you made up your mind about who you’re going to vote for in November?

Fiorina: I’ve been very clear that I can’t support Donald Trump. And, you know, elections are binary choices … I will say this: I think—I hope—that Biden understands that this moment in history calls for him to be a leader, not a politician.

Dovere: But so you are voting for Joe Biden?

But I’m making, I think, just as important a point, which is: He will get a lot of pressure, as all politicians do, to be a politician. And yet I think what the nation is looking for is a leader. What’s the difference? Well, politics is about win-lose. I’m right; you’re wrong. It is, unfortunately, often about an argument between extremes. Leadership, on the other hand, is about problem-solving and making progress and changing the order of things for the better, which means it’s about humility and empathy and collaboration. And I think this moment calls upon Joe Biden to be a leader. I am encouraged that Joe Biden is a person of humility and empathy and character. I think he’s demonstrated that through his life.

Dovere: What about John Bolton, who says he’ll write in a conservative Republican, even though he wants Trump to lose?

Fiorina: I don’t really know what to make of that. I can’t read John Bolton’s mind, but I think John Bolton is desperately trying to preserve some position in the Republican Party as a conservative Republican. And maybe that’s what causes him to say that.

Dovere: Why isn’t it enough to say that the president got tax reform and all the judges, and that he’ll hold off all the liberal policies that he says will come with Biden?

Fiorina: I applaud his Supreme Court justice picks and the justices that he’s appointed into the lower courts. And I’m pro-life, and I didn’t agree completely with his tax-reform package. I didn’t agree with the bailout of big companies. I mean, I don’t always agree with the positions the Republican Party has taken. But, yes, there are plenty of policy differences that I have with Joe Biden. And there are plenty of policy differences that I have with the more progressive wing of the Democrat Party. And yet, I think when Biden talks about the soul of the nation, I think what he’s talking about is values and principles and character. Principles like coequal branches of government, principles like problem-solving should be a collaborative process, a bipartisan process. I think all those things matter.