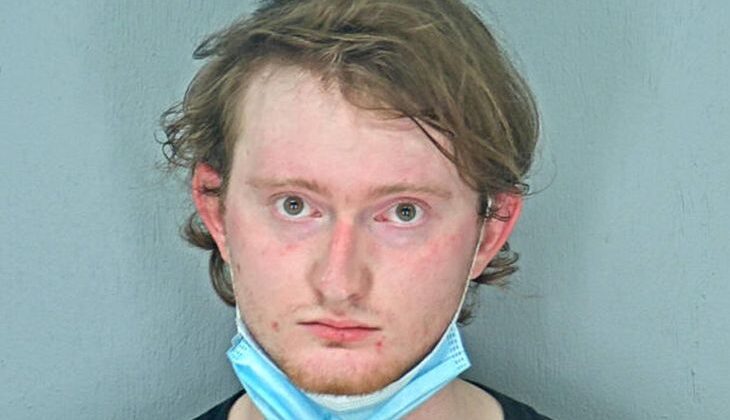 We have seen the enemy, and he is a wuss.

According to Wisconsin police, Matthew Banta, 23, meant trouble during a recent riot. When he was arrested in Green Bay Saturday night, Banta had in his possession a flamethrower, smoke grenades, and fireworks as he was headed to what CNN might call another “fiery but peaceful protest.” Banta evidently intended to see to the “fiery” part personally.

WBAY picks up the story:

Green Bay police say they were called for “a whole bunch of white people with sticks, baseball bats and helmets headed… towards the police” on Walnut St. near Webster Ave.’

And all they were saying is “give peace a chance,” right?

A responding officer says he saw four individuals walking towards a protest with baseball bats. One man was wearing a metal helmet with goggles and military-style gear with multiple pouches, and was carrying an Antifa flag.

Because they just want peace.

When the officer pulled his squad car in front of the group, they ran away. The officer caught Banta, who was carrying the flag, and says Banta “dropped into the fetal position and began crying.”

In military engagements of the past, the flag carrier was unarmed and often turned out to be the bravest on the field. While chaos and death swirled around him, he simply marched forward carrying that flag, giving the troops a rallying point, until he caught a bullet. Then the next man would pick up that flag and march on, and so on until they either achieved the objective or lost the battle.

But antifa’s soy-boy “commander” collapses into the fetal position and sobs.

He’s facing a slew of charges both from this event and a previous one, when he was arrested and is charged with “reckless endangerment with a weapon, two counts of battery to an officer, resisting an officer and disorderly conduct with a weapon.” In that incident, he was carrying a loaded gun with a bullet in the chamber.

Most 23-year-olds don’t have $12,500 lying around for posting multiple bonds. Question: Where’s the bond money coming from? Is Democrat vice-presidential nominee Kamala Harris still helping bail these people out of jail?

Should a prosecutor bother to do their job and prosecute crying fetal boy Banta, how’s he going to respond to a few years in prison?

How long is a galactic year?