Trump supporters were targeted in California with rogue yard signs 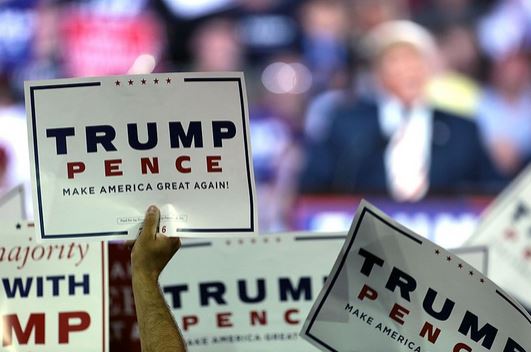 Police in Coronado were called out after some residents woke up to find signs reading “Racism Lives Here” in their yards.

The red, white and blue signs are well-made and are close in appearance to some Trump/Pence signs, with the phrase “Racism Lives Here” replacing the candidates’ names and the updated 2020 campaign slogan “Keep America Great” switched to 2016’s more-familiar “Make America Great Again.”

Police told KNSD that placing a sign in someone else’s yard may be “unwanted,” but is not a “crime.”

Residents were shocked and offended, with one telling KNSD: “We do not feel [Trump]’s racist in any way, shape, or form.”

The San Diego Union-Tribune said there were half a dozen reports of the signs:

The Coronado Police Department received six phone calls from residents complaining about these unwanted lawn signs that mirror the colors, font and design of Trump 2020.

Two of the callers had Trump signs or flags decorating their home, according to Coronado Police Department Spokeswoman Leah Corbin.

Officers are in the process of collecting security camera footage from one of the homes. Additionally, officers will be out and patrolling those areas, she added.

The community is home to three U.S. Navy bases, including the training facility for the Navy SEALs.