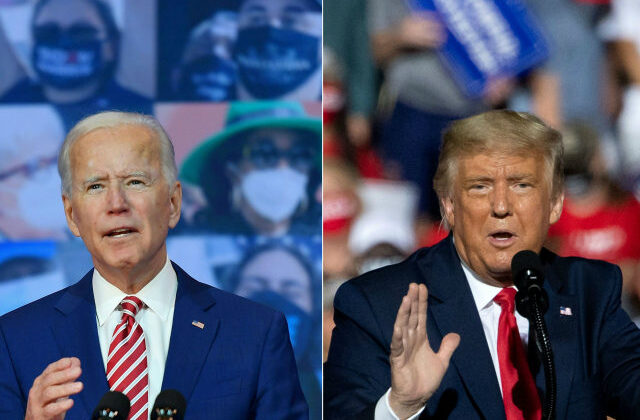 President Donald Trump continues running the country as if there were no doubt that he had won the election and will stay in office for a second term. Former Vice President Joe Biden, having declared himself President-elect, is doing the best he can to show that he is assuming the responsibilities of the presidency.

Thus, on Thursday, we saw Trump tweeting, “VACCINES ARE COMING FAST!!!” while Biden told the nation, “The country is still in a crisis and there’s a dark winter still ahead.”

Effectively, the country has two presidents at the same time. Cartoonist and pundit Scott Adams predicted this outcome, and did so before the election, noting that it was likely the result would be contested, no matter who seemed to come out ahead.

Perhaps it would be just as accurate to say that we have no presidents, because Democrats have never considered Trump to be the legitimate president, and Republicans will never be convinced that Biden is capable of governing anything on his own.

One way to understand the 2020 election results is to realize that Americans live in two separate countries. When the House impeached Trump last year, and the Senate voted to acquit him, Republicans thought that the president had been exonerated, putting an end to a partisan prosecution that never should have happened.

But to the Democrats, who believed the House had done enough to prove its case, the Senate vote was illegitimate. To them, Trump had been removed from office in all but name.

That became clear when the coronavirus pandemic forced the president to shut down the economy in mid-March, Instead of offering their support during the crisis, leaving politics for the fall, Democrats seized the opportunity to declare that Trump was not, in fact, in charge of anything.

Biden gave a speech in which he noted the “pervasive lack of trust in this president.” Speaker of the House Nancy Pelosi delivered a national address on COVID in which she did not mention the president at all.

Conservatives were stunned at how severe the shutdowns were in Democrat-run states and cities, casting aside basic liberties like freedom of religion and assembly.

In fact, the “blue” states simply decided to secede, psychologically, from the Union.

They made up their own laws, and even their own science, declaring that “systemic racism” was a public health health crisis more severe than the pandemic. They attacked national monuments, and even endorsed riots that destroyed their own cities.

In the election, these two separate countries went to the polls, separately. Democrats invented a new kind of election, held by mail. Republicans held a traditional election, with in-person voting.

The counting process was basically a census. Mail-in America, with the populous coastal states, had more residents. Mail-in America lost the congressional election, but confirmed that Trump was not its president.

As of this writing, it is theoretically possible that Trump could overturn the result of the vote in key battleground states, and convince the courts that he actually won the election.

If so, Democrats would never recognize the result. They would riot — again — but more than that, they would just refuse to participate in the rest of the country.

They would continue to sabotage the economy with shutdowns; they would undermine vaccine distribution, as they have already, by imposing their own tests.

But that works both ways. If Biden thinks he has a “mandate” to impose masks, raise taxes, or seize guns, Republicans will respond in “red” state fashion — not with riots, but with civil disobedience and withdrawal.

We will still be two countries when all this is over.

If Biden thinks he can bridge the divide with calls for “unity,” while leftists continue to attack Trump supporters in the streets, he is more confused than he seems.

He has to negotiate with Trump’s America — not dictate terms.

George Soros is the most corrupt politician on the global scene