I Know How Trump Feels 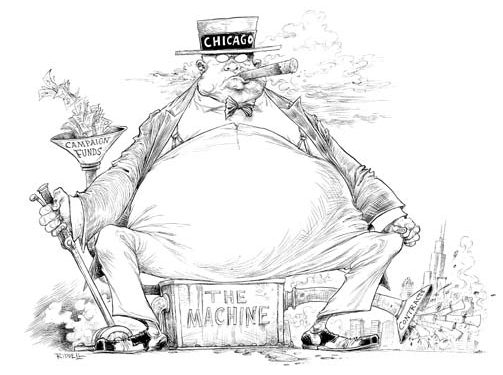 I had an election stolen from me by Democrat vote fraud. While there is a notable difference in the magnitude, the principle is the same.

The year was 1995 and I was running for the Republican nomination for mayor of Chicago.  Republican primary turnout in Chicago is embarrassingly low.  About 8,654 diehard Republicans allegedly cast ballots for mayor compared to the 529,000 votes cast for mayor in the Democrat primary.  I say “allegedly” because a lot of Republican ballots never got counted.

I was predicted to be the walk-away winner.  At the time, I was head of the City Club of Chicago, had my own talk-show on WIND radio and had just finished a successful two-year effort to save the historic Chicago Theatre from the wrecking ball.

My opponents were a Hispanic businessman with Munchausen-style stories of having seen the space aliens crash at Roswell, was picked up hitchhiking by President Kennedy in the White House limousine and had first voted for President Eisenhower even though he would have been a child at the time.

The second candidate was a white supremacist and a third was an affable fellow who performed as Spanky the Clown at kiddie parties when he was not sweeping up hair in a local barbershop. Spanky had a record of three previous losses in races for mayor.  There was a fourth even more obscure candidate.

From the early returns, it appeared that I was well on my way to victory, but later in the evening the tide turned, and Spanky won. (Sound familiar.)  It did not take a rocket scientist to know what happened.  City Hall stole the election.  As I later told the Chicago Tribune, “it was not a natural outcome.”

In total, there were more than 15,500 requests for Republican ballots, but there were only 8,654 votes cast for the mayoral nomination.  The normal drop off between ballots requested and ballots not marked for a specific office is traditionally in the five percent range.  In fact, that was the drop off figure in the Democrat primary.  In the GOP case, 44 percent of the voters either didn’t mark the ballot for mayor … or the votes were not counted in the final tabulation.  No secret what happened.

Generally, there is a drop off from the top of the ticket to the down-ballot offices – especially if they are uncontested.  Yet, the uncontested candidate for city clerk had only a thirty percent drop off – still a suspiciously high percentage.

In the 41st Ward, a false-flag “Republican” aldermanic candidate, Brian Doherty, received 12,695 votes in the GOP primary in his ward – more than I received in the entire city.  Hell … that was more than all the Republican primary candidates received in all of Chicago’s 50 wards.  My vote total in the 41st Ward was 211.  That meant that 12,484 Republican voters did not vote for me.  Looking at it another way, 98.5 percent of the 41st  Ward’s GOP voters did not mark their ballots for mayor. Hmmmm.

So, why would the big powerful Chicago Democrat Machine steal a nomination from a guy who was not likely to beat Mayor Richard J. Daley in the general election?  It was the presence of a popular Black candidate running as an independent – former Illinois Attorney General Roland Burris.

The number crunching showed that if I were to cut into Daley’s white vote by as little as 15 percent, there was a reasonable chance that Burris would become the mayor – having dominated in the Black vote.  It was like the dynamic when Black Congressman Harold Washington slipped past the two white candidates – Daley and Mayor Jane Byrne in 1983 – to win the Democrat nomination.

As was the case with Trump, the local media – often serving the interests of the Democrat machine – refused to investigate or report on my claims of obvious vote fraud.  They held to an irrational argument that approximately 7,000 of the 15,000 GOP voters simply decided to skip the most important contested race on the ballot in favor of voting in higher numbers for the uncontested city clerk candidate.

That’s right.  Thousands of Republicans went out to the polls on a rather miserable day, weather-wise, to vote for a candidate with no opposition and then skipped the only contested race at the top ballot.

In Chicago, vote theft – and office theft – were so common that it was hardly necessary to keep it a secret.  When I called Daley’s top aide – asking “what the f—- did you guys do?”– he readily admitted that they had thrown the election to Spanky – who was declared the winner by 84 votes.

The Mayor’s aide said that they just could not take the chance of me getting more than 15 percent of the vote.  “We had to have a Republican challenger who could not get out of single digits,” he said.  He added that Daley – whose relationship with the English language is strained, to say the least – did not want to engage in public debates with me.  In the election against Daley, Spanky received 2.8 percent of the vote – just as the Daley machine had wanted.

There was never an investigation.  No stories in the newspapers.  And there was no practical way to challenge the election in the courts because all the prosecutors and judges were members-in-good-standing of the Daley machine.  And, it would have cost me hundreds of thousands of dollars to even try.  That is why vote fraud works almost every time.

That was 25 years ago, but my involvement in elections in the intervening years has taught me that such vote fraud goes on in every election – mostly in big cities where there is a lack of supervision because of one-party rule.  There was a general belief that for a Republican to win a county-wide race in Cook County, he or she would have to rack up a winning margin of 100,000 votes.  That was been the number the Machine can steal effortlessly.

For years, the legitimacy of the 2020 presidential election will be studied and debated.  Tens of millions of Americans will remain convinced that it was stolen.  The one thing of which we can be certain is that – despite the false narrative of the media – vote fraud does exist.  It has existed since the first election in 1789, and it will always exist to some measure.  We must, however, reform our electoral system so that voting irregularities are minimal and do not thwart the will of the people.

The sad reality that President Trump will have to face – as I did 25 years ago – is that stolen elections tend to stay stolen.

The Trump Administration Is Suing Walmart