How Trump’s Impeachment Will Backfire for Democrats

This was a big mistake for Democrats 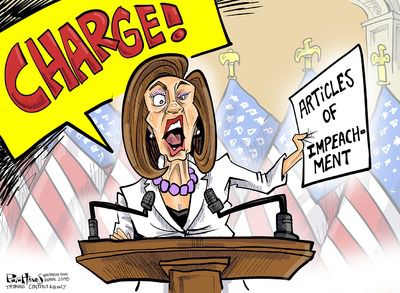 Democrats are patting themselves on the back self-congratulatory righteousness.  They are taking the high moral ground by defending our constitutional Republic from a hostile takeover – or so they claim.

The political left – Democrats and the media – are on a search and destroy mission against the Republican Party – its leaders and voters – and especially conservative Republicans.  To pump-up the importance of the self-declared patriotism they grossly exaggerate the meaning and potential of the riot on Capitol Hill – contrary to their aiding, abetting, promoting and participating in violent riots on a regular basis throughout the years.

The second impeachment of President Trump is just the latest example of their over-the-top campaign against political opposition.  I believe it was a mistake on many levels.

First, there is the issue of timing.  Since impeachment is the means the Constitution provides to remove a President from office, there should be a proper investigation, sufficient evidence, a fair opportunity for a defense and a reasonable potential of removal.  Most of that was absent in the first impeachment of Trump and all of it is absent in the second.  What we had was a rush-to-judgment by a kangaroo court composed of a political lynch mob.

It comes across as nothing more than political vindictiveness.  That seems to be the case when  you consider the extreme hyperbole to which they resorted to create some threshold level of justification — using such terms as “sedition,” “insurrection.” “attempted coup.”  What we saw on Capitol Hill was a demonstration that evolved into a riot.  Bad as it was, it was not as destructive or deadly as some of the larger urban riots led by bad actors on the left – and it was not a coup.

There is general unity in the belief that those who committed crimes on Capitol Hill should be prosecuted to the full extent of the law.  Their action has been condemned by all sides.  What is disturbing is that the left – including many of the most prominent Democrats – have spent recent years promoting and defending civil unrest that has led to extreme violence – looting, arson, property damage, assaults and deaths.

While President-elect Biden talks about unity – and promises to bring America together – he has done nothing to give those words any meaning.  Quite the contrary.  He could have – and should have – stopped the impeachment process.  It is not removing Trump from office.

But it is having an effect.

If Biden and the Democrats were sincere about unifying the nation, they would have skipped the impeachment gambit. It is an extremely divisive action that has the potential of further inciting the nutcases on the extreme political edge.  It will also piss off millions upon millions of Americans who simply voted for Trump out of dedication to conservative principles.  There is no doubt that the impeachment heightened tensions, promoted division and undercut Biden’s unity message.

The impeachment debate took a lot of oxygen out of the legislative room for more important matters – as did the first one.  House Speaker Nancy Pelosi criticizes Trump for not paying attention to the Covid-19 pandemic.  Yet, she can fritter away days on end on a meaningless impeachment and mandatory Senate Trial when there is still … the Pandemic.

Not only has the impeachment dominated the end of the Trump administration, it will also dominate the beginning of the Biden administration.  Since January 1st virtually all news not critical of Trump has been ignored by the leftwing press – including the pandemic.

Even if you look at the impeachment from a pro-Biden view, it makes no sense.  In addition to increasing civil angst, it shatters any hope Biden might have had for launching his administration with a positive unifying message.  It makes his language empty and hypocritical.

The first 100 days can be a particularly important time for a new administration – and a very busy time for the Senate especially. Biden will want to have positive airtime to “sell” his appointments to the public.  He will be laying out more details on his major initiatives.  And he will be using his pen to issue new Executive Orders as well as reversing Trump’s.

But … the news will be about Trump.  The senate will be totally engaged with the trial being presided over by Chief Justice John Roberts.  The will delay approval of Biden’s Cabinet nominations.

Even if Pelosi holds back the Articles of impeachment past the first 100 days, the anticipation of the trial will create stories at the top of the news.  It will keep Trump a much bigger news item than he would have otherwise been.

The two Trump impeachments are the first in which the so-called evidence is vague and a matter of interpretation.  Even if you accept that Trump’s words were over the top, that is far from accusations of planning and initiating an insurrection against the country.

Finally, Pelosi & Company have now lowered the bar on impeachments.  It is no longer kept in reserve for serious high crimes and misdemeanors by a President.  It can obviously be used over partisan bicker and not as a serious means for removing a rogue President.

If the only objective is to place a black mark on a President’s historic record, impeachment has become nothing more than a sanction.  The current debate as to whether Trump should be impeached or sanctioned proves that the option has become a distinction without much of a difference.

It appears that Pelosi is hoping that throwing mud at Trump and the Republicans will benefit Democrats in the 2022 midterm election.  But she may just anger millions of Republicans who will be eager to seek their own revenge at the ballot box.

A record 309 million Christians were persecuted in 2020