Which State is Handling COVID Best? 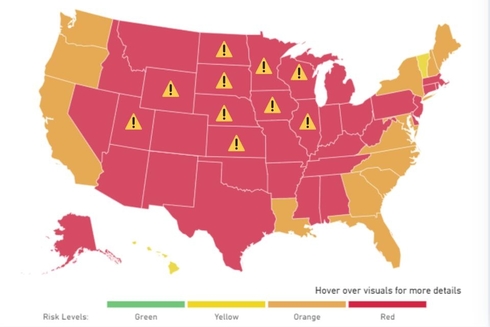 The coronavirus pandemic has been a vastly different experience in Florida than in California. In the Golden State, Democratic Governor Gavin Newsom has implemented round after round of closures and has forced students to continue taking classes online. Compare this to Florida, where Republican Governor Ron DeSantis allowed bars and restaurants to reopen in the summer and has given public schools the green light to resume classes. So how do COVID cases in California and Florida compare?

Based on each state’s response to the pandemic, it may come as a surprise that the number of COVID cases in California is twice that of Florida.

The Sunshine State also has a much lower unemployment rate than California (6.5 and 9.3, respectively).

“So I hear people say, ‘Oh, well, Florida is open, and they’re having increased cases,’” said DeSantis in November. “Well, okay, the states that are locked down are increasing at twice the rate we are. If you look at the per capita cases, in a lot of these states that have closed schools, businesses shuttered, some of them even post stay-at-home orders there, you see a huge increase in these cases.”

Take a look at the chart above.

It shows the number of cases in Florida alongside the 10 states with the strictest combined requirements on business openings and stay-at-home advisories. According to Politifact, Florida performed even better against states with restrictions similar to its own – including Nebraska, South Dakota, and Indiana. This suggests other factors may be at play here, most likely the warm climate that allows for outside dining year-round.

Author’s Note: Considering the fact that Florida has the highest per capita rate of retirees in the nation, these numbers reflect very poorly on California and its Democratic leadership.

Sources:
Closed California versus open Florida, who is outperforming the other?

Is Florida doing better on COVID-19 than “locked down” states?
Is Florida better than California at containing the coronavirus?