Another Shooting and the Left Blames Guns – Again 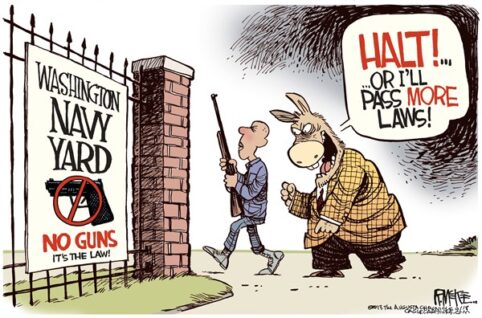 After every tragic shooting, the left-leaning Democrats – and their media cronies – roll out the same anti-gun rhetoric and the same old pseudo-solutions.  Will this time be different in terms of the left’s legislative so-called gun control legislation? – they rhetorically wonder.

Probably not.  But not because the majority of members of Congress have a heartless disregard for the innocent lives taken by yet another mad man.  It is just that the proposals put forward by the Democrats do not address the problem.  None of the proposals touted by President Biden, Senate Majority Leader Chuck Schumer and House Speaker Nancy Pelosi would have prevented the recent shooters in Georgia and Colorado from obtaining weapons and carrying out their malignant actions – nor any of the previous shootings.

Oh … they wax on about how their measures will save lives, but that is poppycock.  If the current restrictions on gun purchasing and ownership have failed to stop the long series of mass shootings – and the new proposals would not have prevented any of the past tragedies – what justification is there for the promise to save lives in the future?

Democrats well understand that they run right into the Constitution with their fantasy of eliminating all gun ownership – or even the ownership of semi-automatic weapons, which would outlaw everything short of a muzzle-loading blunderbuss.

The instruments of murder are benign except for the actions of the murderer.  The left would have us focus on the instrument and not the person wielding it.  Virtually all the mass killers have had a history of mental illness or anti-social behavior.  They are sociopaths … psychopaths.

The focus needs to be on the person – both for punishment and future prevention.

We do not blame the car when a driver kills a group of pedestrians – which has happened on several occasions.  We blame the driver.  In some cases, it is the drunk driver. But never the car.

Those with an established history of mental illness are already denied legal ownership of guns – even mild cases.  If a person has been hospitalized for depression, that is sufficient for them to be placed on a no-gun list. It is the equivalent of taking away a drunk driver’s license.

Potentially dangerous characters can be reported to authorities.  Guns can be taken away.  If the law is not enforced – as was the case in Parkland, Florida – there is no new law that can correct that.

Oh … there could be some marginal legislation — like banning bump stocks – but that will not stop a future nutcase.  The Democrat legislation tends to make us feel good rather than do good.

Why is there such a clamor for legislation that will not effectively address the problem?

It is all politics.  Democrats believe that by proposing legislation that makes us feel good – or makes us feel like we are doing good – they get political advantage.

I suspect that Biden, Schumer and Pelosi know that there is little chance that adults in Congress will actually pass any Draconian legislation to limit the ownership of arms by law-abiding citizens.  They just want to be able to point a crooked accusatory finger at Republicans – and Democrats – who respect the Constitution and are not buying into bogus window-dressing legislation.

There is another side of the mass shooting issue.  It is a pity that no one in the grocery store in Colorado – or the massage parlors in Georgia – had a gun.  There was a Church shooting that was cut short when a parishioner took out the gunman with his personal concealed weapon.  In another Church shooting, a citizen opened fire on the shooter – and chased him away in his vehicle.

Maybe that is why most shooters pick what they consider to be soft targets — gun-free zones – such as schools.

Whenever there is one of these mass shootings, I always feel sad that there was no immediate return fire.  What if those teachers in Sandy Hook had been armed?  It is worth considering.

Just for the record, I am not a gun owner.  But I have often said that if I am ever in the crowd when a nutcase shooter opens fire, I will hope and pray that a lot of the folks on the scene will be armed and skillful.  I bet even the most ardent anti-gun advocate would wish the same if they were in such a situation.

I do not have a good answer to the periodic mass killings.  Wish I did.  But I refuse to embrace ineffective – nice-sounding – proposals.  If there is a reason for so many mass killings in America, then let us work together to find it without being distracted by meaningless politically-motivated propositions.