Covid Numbers Are Improving, So Why Is Fearmongering Continuing?

Let's look at the actual data... 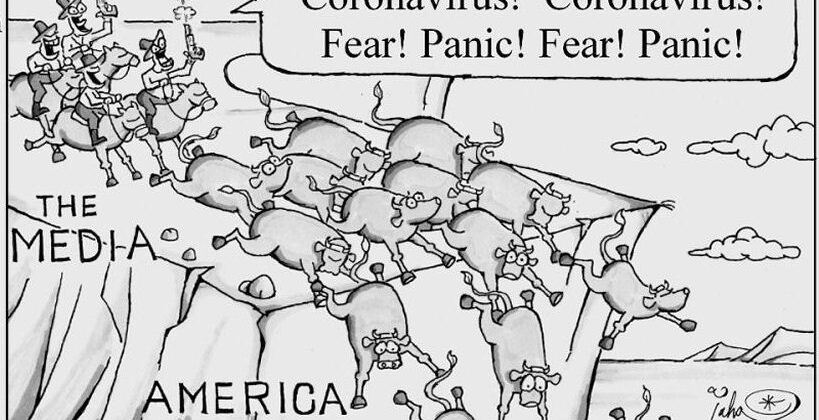 As I monitor the reports on the Covid-19 pandemic, I find it necessary to dig into the actual data to see if the reporting confirms the official statistics.  As usual, the reports leave out critical information that does not support their politically biased narratives – and even the most important numbers.

I write the commentary wondering who will get to read it.  Because I am FACTUALLY questioning the persistent fearmongering of the Covid-19 pandemic, I tend to get canceled by the large politically biased social media platforms.

So, allow me this disclaimer.  I am totally in favor of taking all NECESSARY protective measures. I have gotten my two vaccinations and I do wear masks in in-door commercial establishments when required to do so.  I also am okay with people taking whatever precautions make them feel safe and comfortable – even if I personally believe they are excessive or unnecessary.  I just do not want what I believe to be excessive and unnecessary protections forced on me.

As far as I can tell from the official government numbers, we are over the hump in terms of the worst outcomes of the pandemic – that being life-threatening cases and deaths.   In some areas, the number of cases has plateaued after dropping precipitously.  In most areas, they continue to drop.

Of the 30.9 million cases repeatedly reported in the media, more than 23 million have recovered.  Now with the antibodies, they are moving the population closer and closer to herd immunity.

Just a few months ago, the number of recovered cases and the number of active cases were about the same.  Today, the recovered cases are more than three times the 7 million Americans currently infected with Covid – and that latter number is dropping.  Simply put, the recovery rate is moving up faster than the infection rate.  That is good news that the news platforms do not report.

The number of cases the government reports as “serious/critical” across the entire nation has now dropped to 8,594 at the time of this writing  — and most of those are in states with large city populations.  In other words, we are apparently on the leeward side of the pandemic.

Eighty percent of the Covid deaths have been in the senior – over 65 – community.  There are now approximately 60 million folks who are fully vaccinated  — not the more than 100 million President Biden claims.  His count includes those who have had one shot.

Most of the administered vaccines have gone into the arms of the most vulnerable – the old folks.  Since they represent 80 percent of the deaths, that explains why the death rate – and the number of serious/critical cases – are both dropping.

In my last look at the statistics, not a single vaccinated person – even with one shot – has contracted Covid-19.  More good news regarding the efficacy of the vaccines.

But still, the media and many of the doctors are acting as if we are at the peak of the pandemic with no vaccine in sight.  And they are hellbent on blaming President Trump and Republican governors – even though the two most impacted states are blue states with Democrat governors.

The people know better.  That is why they are coming out in public in droves.

Millions of Americans are ignoring warnings to stay locked down at home.  They are boarding airplanes in numbers not seen since the start of the pandemic.  Restaurants are getting crowded – and the social distancing seems to be shrinking.  In a recent visit to a favorite eatery, the booths on both sides of me were filled – and no masks.

And what about all those young folks who filled the pubs, beaches and streets of Miami Beach – not to mention any number of other Spring Break destinations in the U.S. and Mexico.  And they were hardly a bunch of Trumpers – as the media suggests of all who will not strictly obey the politically-based fearmongering in the daily news reports.

As a political FYI, the data suggests that none of those crowded Trump rallies turned out to be a super spreader – despite all the pre-event politically-motivated speculation.

Yes, we should follow the science – and I do.  The data shows that throughout the pandemic I had only a 10 percent chance of contracting Covid.  Even if I did get the virus, I still had a 97 percent chance of recovering.

Now that I have the vaccination, my chance of getting Covid is near zero – and of dying from it is statistically incalculable.  Between those already inoculated – including the one-timers – and those who have recovered, we are approaching half the nation.

Yes, there are local spikes, but they are a precious few and diminishing.  And even where the number of cases increases, the severity and death continue to decline.  That is because with high-risk seniors being vaccinated, it is the low-risk folks showing up in the tests.

Despite the ominous reporting from the east coast media, state after state is rolling back restrictions – and that includes red states and blue states.  People are showing up in public.  Groups are gathering.

If the data is correct – and the doctors are correct – the Great Pandemic of 2020-21 is in its dying days over the course of the next few months.  Of course, that is just an opinion.  Let us all hope it is a correct one.