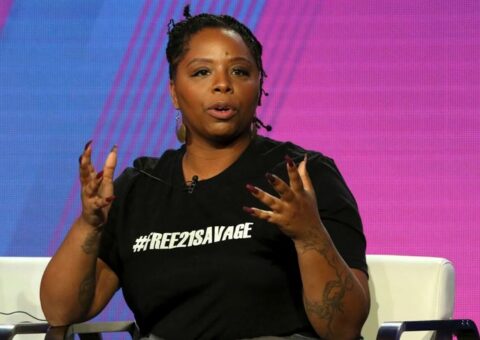 According to the New York Post, Khan-Cullors is a “self-described Marxist.”

Khan-Cullors helped start the Black Lives Matter organization in 2013 after George Zimmerman was acquitted of murder following the death of Trayvon Martin. She bought the home in Topanga Canyon, a longtime popular getaway for Hollywood actors and musicians.

According to U.S. Census data, 88% of residents in Topanga Canyon are white. Fewer than 2% are black.

A secluded mini-compound tucked into L.A.’s rustic and semi-remote Topanga Canyon was recently sold for a tad more than $1.4 million to a corporate entity that public records show is controlled by Patrisse Khan-Cullors, 37-year-old social justice visionary and co-founder of the galvanizing and, for some, controversial Black Lives Matter movement.
…
A winding 15 minute drive from The Commons at Calabasas and a slightly longer and somewat less serpentine drive from Malibu’s Getty Villa, the pint-sized compound spans about one-quarter of an acre. The property’s not-quite 2,400 square feet is divided between the a three-bedroom and two-bath main house and a separate one-bed/one-bath apartment capable of hosting guests long term with a private entry and a living room with kitchenette.

Before Khan-Cullors bought the home, there were speculations regarding the finances of the Black Lives Matter movement.

There have been lucrative deals to write books and create other black-centered content. Khan-Cullors has also been accused of “grifting off of Black tragedy for financial gain,” according to a Moguldom Nation report.

“For somebody that claims to love Black people, it’s kinda strange that she chose a place to live that’s practically devoid of Black people,” a Twitter user wrote.

Some accused her of cashing in on BLM. “She capitalized on that ‘Injustice against Black People’ bag. They’ve been scamming since day 1,” another tweeted.

“This is blood money,” charged another.

In February, Black Lives Matter announced it had raked in more than $90 million in 2020.