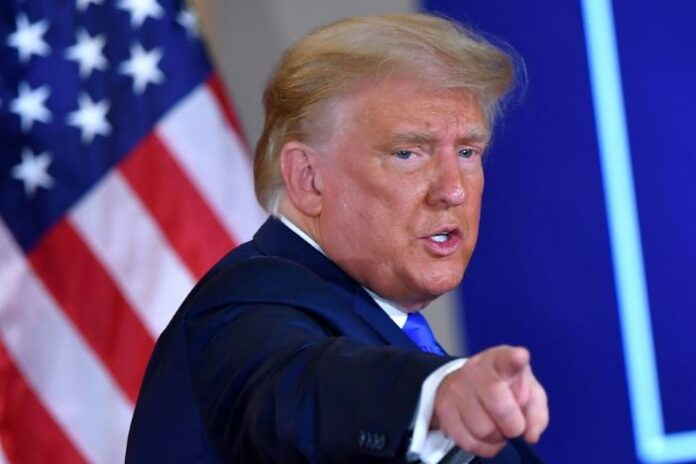 Democratic news agencies had a field day trying to bury the idea of Donald Trump having any future success. By his own decision, Donald Trump removed the news desk blog from his own website today. After months of being banned from virtually all social media platforms, Trump launched his own website blog. It was like a social media platform to share messages and motivation to his conservative America First MAGA movement.

Despite being a massive violation of his first amendment right to free speech and despite being the former President of the United States who is still to this day being actively censored from speaking online, at least he was able to share his message on his own website. With the change on the site today, many news agencies celebrated his decision to take down his own blog.

MSN posted the headline of the news with “infuriated by measly readership” with “celebrated by advisors as a “beacon of freedom” that would keep him relevant in an online world he once dominated, is dead. It was 29 days old”. Drudge shared the same, highlighting the headline in red as to show it off as some of the most important news for the day.

The usual suspects of modern media followed suit and shared likewise. Even still, when it comes to the freedom of speech from a former President, no matter the viewership, as a reader myself I still considered it to be that beacon of freedom to the extent that it did still exist online. All of these agencies can trust that Donald Trump’s relevance is far from dead.

The blog did have its downsides. It was only a website, not a full-blown conservative social media platform; it did not have an app to go along with it for supporters to share with their friends and family. Access to the site was short without connection to the behemoths of social industry that we have today. If the likes of Facebook, Twitter and Youtube didn’t scare the population into acting accordingly to save themselves from censorship, one can imagine that nothing about the stature of the former President would have changed. With the thought of the silent majority still in mind and looking at the flags and signs still sitting in peoples yards across the country, I am not so sure that anything actually has changed.

What is necessary for the future of the conservative movement, regardless of Donald Trump, is to build a social media platform where conservatives and those who love America and stand against the ideologies of global communism can come together to share opinions and ideas freely. Parler is a platform that just recently went back online. But even that platform seems to have lost confidence from its users. The entire platform was discarded with such ease and used against the users themselves.

Personally, I can’t believe I am currently sitting in an America where we all watch the freedom of speech and thought being sacrificed every day and being replaced by a new narrative of wokeism. We all see it happening across the spectrum. Even with some Democrats facing the legal abuses themselves for speaking out against narratives. Still, little has been done to protect our freedom of speech and thought online. These companies were built in the United States. They made massive profits off of our viewership. And they are still not held accountable to the most basic structures of this nation.

With a new, well-designed conservative social media platform that ensures freedom for its users, maybe there will be a future of hope. One where technology will not empower itself on a global scale and destroy the constitution. Personally, that’s why I call myself Machine. It represents an alternative world view where technology enhances individual freedom rather than destroying it entirely. I believe AI and technology are inevitable. But I also believe, looking at history, that the truth will conquer. What is right for the future of humanity will continue to keep moving forward.

With all of that, senior advisor Jason Miller stated today that, “stay tuned… it (the blog) was only an auxiliary to the broader efforts we have and are working on” and that a new social media platform currently in the works to completion will “completely redefine the game”.

Let us hope that is the case. No matter if you are Republican or Democrat, no matter if you support Trump or hate him, this is a vital subject for the protection of the foundation of our nation. Every walking soul should be concerned about a President losing the freedom of speech. No matter where you stand or your opinion of the man.

Without the freedom of thought and speech online, for any and everyone, I am not sure that a good future for the freedom of humanity is possible. Regardless, personally, I will never lose hope or faith. I will keep moving forward to help build a nation of truth and create a world worth living in.