Mother Teresa was a ‘Troubled Individual’ According to Critics 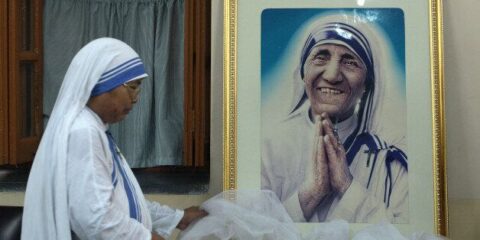 When Pope Francis canonizes the late Mother Teresa at the Vatican on September 4th, she will officially be recognized as a saint of the Roman Catholic Church.

For her followers, the title is a mere formality. They believe the world renowned humanitarian displayed saintly qualities throughout a life dedicated to serving the poor.

But saintly is not a word everyone uses for Mother Teresa. Her critics say she was anything but.

Disillusioned former volunteer Hemley Gonzalez didn’t meet her in person, but what he calls the “horrific remnants of her legacy” have left him deeply uncomfortable. After visiting the facilities she’s responsible for starting, he feels only a “troubled individual” could have set them up.

After the financial crisis of 2008, Gonzalez took a break from his real estate business in Miami and headed to India, where he spent two months volunteering at Nirmal Hriday, a home for the dying run by Mother Teresa’s Missionaries of Charity in Calcutta’s (now Kolkata) crowded Kalighat area.

Gonzalez says he was appalled at the poor level of hygiene and medical care he saw there. He says the organization didn’t vet him or the other volunteers. None, including himself, had any medical experience or received any training before working at the hospice.

He claims he saw nuns routinely reuse needles after washing them in tap water, that clothes – sometimes soiled with urine and feces – and cooking utensils were hand washed side by side in the same room.

Patients suffering from respiratory diseases had to bathe in freezing water because a single water heater wasn’t barely enough for one bath, he says. And he claims there was not a single doctor or medically trained nurse at the hospice.

“It was a scene out of a World War II concentration camp,” says Gonzalez.

Gonzalez says attempts to raise a red flag or offer to install a water heater were always met with the same response by the nuns. “We don’t do that here. This is the way Jesus wants it, they’d say,” Gonzalez tells us.

Chhanda Chakraborti is part of a group of local Kolkata volunteers who has been associated with the Missionaries of Charity for over 25 years. She served at Nirmal Hriday for several years before Gonzalez did.

“All these claims are rubbish. These critics are actually lying,” she says. “You go to Kalighat, people come in dying condition. Most of them regain their lives. How can they give life to a dying person while being careless with their health?”

What they do in the homes run by the Missionaries of Charity, says Sunita Kumar, a spokesperson for the group and a close friend of Mother Teresa, is offer basic care to the poorest of the poor.

“She didn’t want to start a five-star hospital or anything like that,” she says.

Since the group receives millions of dollars in donations from around the world, they say they should use it to build hospitals, schools and to upgrade their facilities.

It’s true there’s no transparency – and very little information available – on the group’s bookkeeping. CNN’s request to interview the current head of the organization was declined.

“The funds are coming,” Sister Joan of Arc, head of the children’s shelter in Kolkata, told CNN. “We can feed every hungry mouth every day. It’s the miracle of love.” Questions about funds are often met with a similar response.

That doesn’t satisfy the critics. As a registered charity operating in over a 100 countries, they say there needs to be some accountability, as there is with groups such as The Red Cross or Oxfam.

Mother Teresa’s dogmatic views on abortions, contraception and divorce may have been welcomed by the socially restrained Vatican, but they have also been criticized in more progressive circles and put her at odds with the feminist movement.

She raised some eyebrows when, during her Nobel Peace Prize Lecture after winning the prize in 1979, she said the “greatest destroyer of peace is abortion.”

Additionally, some critics accuse Mother Teresa of trying to convert those she served to Christianity.

This is something the Missionaries of Charity firmly rejects. “She looked after everybody in the same spirit, whether they were Muslim or Hindu or Sikh,” says Kumar, who herself is Hindu and Sikh.

“When I used to go pray with her, she would say ‘Sunita, come to the chapel and you sit the way you do for your prayers and I’ll sit the way I do and we’ll say our prayers,’” she says.

Even her path to sainthood has been controversial.

To become a saint, Pope Francis had to approve two miracles. One of them involved a rural woman, Monica Besra, who claims she was cured of cancer after praying to Mother Teresa.

Monica says she was cured by Mother Teresa’s blessings and not by doctor’s treatment.

“I took doctors’ medicines, threw up and was in a lot of pain. But when I prayed to Mother Teresa from my heart, Mother Teresa blessed me and now I am healthy,” she told CNN. “My entire village and I am very happy that she is being made a saint.”

However, critics dispute this version of events — they say it was modern medicine and not a miracle that healed her. And some doctors claim her tumor was a cyst caused by tuberculosis, rather than a cancerous tumor.

“Our organization does not believe in any kind of miracle,” Prabir Ghosh, General Secretary of Science and Rationalists’ Association of India, told CNN.

According to Ghosh, Monica Besra’s husband said as much to him in 2003. Ghosh told CNN that he has him on video saying his wife was cured by medicine, rather than Mother Teresa.

In an interview with TIME magazine in 2002, Besra’s husband also challenged the Vatican’s claim. “It is much ado about nothing,” he told TIME. “My wife was cured by the doctors and not by any miracle.”

However, Besra has since denied these statements. This week, he told CNN he stands by Mother Teresa’s miracle and never made the comments to TIME.

As these controversies rage on, life inside Mother Teresa’s homes carries on as usual, with the same simplicity and routine that’s been in place for decades.

According to Gonzalez, it’s a “museum of poverty.”  To some, it’s a place of selfless service.

A group of nuns will travel to the Vatican for the canonization ceremony in September, and those who remain in Kolkata will mark the day with prayers of thanks.

For them and other devout followers around the world, Mother Teresa was and will forever be, a saint, and no amount of controversy can change that.