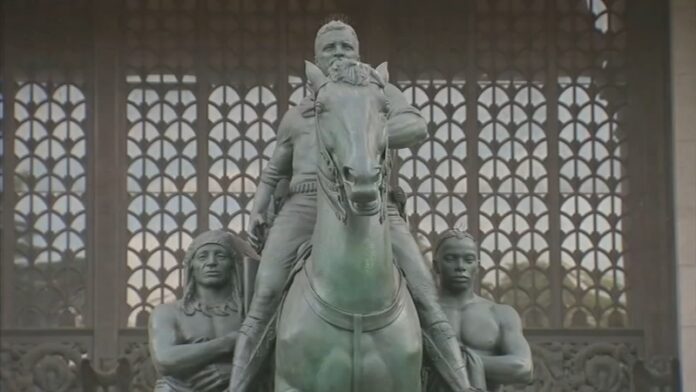 New York is about to remove the statue of Teddy Roosevelt based on an outrageous contention that it represents white superiority and racism.  Weeell … if that was their concern, they should be removing all memorials and statues honoring the other Roosevelt – Franklin D.  Unlike Teddy, FDR was an unabashed white supremacist and racist. He engineered the depression-era New Deal to throw millions of black people onto unemployment so that unemployed white folks could take their jobs.

It is increasingly obvious that “political correctness” and “wokeness” will prevent America from being a unified society.  There appears to be a well-entrenched elitist culture that runs contrary to basic American values and an overarching patriotism that is necessary to be a nation of common culture.

The liberal elite have again shown their contempt for anything that might reflect American values and an honest understanding of our history – including our less noble moments.

The basic difference between the average American and the politically-correct woke class is whether America is a great and exceptional nation – with a few blights on our history (most of which have been corrected) – and the view by the left that American flaws are iconic and characteristic of the nation and the masses of citizens.  One side sees a great nation with flaws and the other an inherently evil country not worthy of respect.

We should never forget that it is authoritarian regimes that erase real history in favor of a narrow philosophic dogma based on propagandized narratives.

In the spirit of wokeness, the American Museum of Natural History has persuaded the New York City Public Design Commission to remove the statue of Teddy Roosevelt from their front door. It has stood there for 80 years without protest, by the way.  The commission complied in a unanimous vote.

Radical progressive Mayor Bill DeBlasio had weighted-in in support of removing the statue.

In an earlier statement, he said, “The City supports the Museum’s request. It is the right decision and the right time to remove this problematic statue.”  Of course, the statue only got “problematic” after the far-left ideologues started the controversy misdescribing the statue in false terms – yielding to woke interpretation rather than factual history and accurate symbolic meaning.

DeBlasio added, “The American Museum of Natural History has asked to remove the Theodore Roosevelt statue because it explicitly depicts Black and Indigenous people as subjugated and racially inferior.”

To put it bluntly, that is a lie.

Museum spokesman Dan Slippen said, “The understanding of statues and monuments as powerful and hurtful symbols of systemic racism became even more evident in the wake [does he mean “woke”?] of the movement for racial justice that emerged after the murder of George Floyd.”

Slippen added, “It has become clear that removing the statue would be a symbol of progress toward an inclusive and equitable community.”

So …  redefining the character of Teddy Roosevelt and the symbolism of the statue that reflects his racial tolerance at a time when racist Democrats  — such as President Woodrow Wilson and FDR  — were imposing institutional racism on the very people black people and Native Americans depicted so positively and powerfully in the Teddy Roosevelt statue is DeBlasio’s and Slippen’s idea of inclusion and equality.  You just cannot make this stuff up.

In the malignant view of DeBlasio, Slippen and the far left, the statue of Teddy Roosevelt is offensive because he is astride his horse with a Native American and Negro standing alongside.  The standing statues reflect a strong and determined Native American in full regalia. It also features a bare-chested black man you might see emerging from the fields of cotton as a freeman.  The statue is a message of tolerance and independence. It’s a contrast to the Democrat slavery era and President Andrew Jackson’s deadly Trail of Tears persecution of Native Americans.

The two minority figures are walking proudly and carrying guns. This suggests that they are part of Teddy’s team, not as symbolic representatives of subjugated peoples.  They are not in a state of submission.  According to the sculptor – and those who commissioned the statue – the purpose was to show Teddy’s respect for minorities.  He is on a horse – consistent with the imagery of generals and presidents of that era.

To suggest that the statue is racist – and thereby offensive – is wokeness gone amok.  It is only their historically and symbolically distortion of reality that has anyone alleging such bovine byproduct.

New York removing the Roosevelt statue is even worse when you consider it is at the request of a history museum. An institution that is supposed to be dedicated to the honest representation of our national history. Instead, the New York pseudo-intellectuals who run the Museum are corrupted by left-wing elitism that proffers the divisive dogmas of political correctness, identity politics and woke thinking.

Moving the statue to a place with greater associates with Teddy and his family is not a bad idea in and of itself.  But it is the reason for the move that makes it so repugnant. The intent is not to bring forward forgotten portions of our history as a nation.  No, no, no.  The intent is to censor and ultimately cancel history – to redefine it.

The removal of the Roosevelt statues is wrong.  The reason is a fraudulent re-write of history.  It is pandering to victimization where there is no victimization in the massive bronze statue.

We can only hope that this era of wokeness and political correctness ends before it has completely destroyed the nation.