Enough of This Coup Crap… 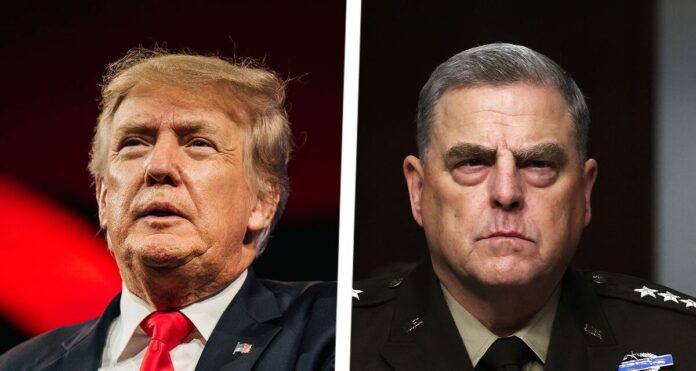 Washington Post writers have produced yet another book – an anti-Trump book, of course.  It will receive the treatment all left-wing books get in this country.  The fact that these highly partisan books get instant publishers is the first evidence that the book industry is a captive part of the left-wing propaganda machine.

Of course, the book will get rave reviews from the New York elitist media. And the authors will be guesting on virtually every program in the CNN and MSNBC line up.  Excerpts from the book will be top of the news stories for the mendacious liberal media platforms.  With any luck, it will win an in-house Pulitzer Prize – an award that is given by the left to the left.

The latest book is entitled, “I Alone Can Fix It.”  The more salacious passages have to do with former Joint-Chiefs-of-Staff Chairman General Mark A. Milley saving America from a coup by President Trump.

Milley is SAID to have said that he was deeply concerned that Trump would attempt a coup after losing the 2020 election.  And Milley is SAID to have used words comparing the situation to the rise of Hitler – fearing a “Reichstag Moment.”  He is also said to have “feared brown shirts in the street.”  Milley is alleged to have assured associates that the military would not participate in any coup.  Well Duh!

Of course, the book and all the reporting is based on what others may have said that Milley said.  I have yet to see a single interview in which Milley actually spoke for himself.  If Milley really did say all those things, I would think it was more of a “Seven Days in May” moment.

Long before the 2020 presidential election, the left was seeding a fantastical narrative that Trump would refuse to leave office if he lost.  There was no evidence to support that claim – but irrational hatred of Trump does not require evidence.  Just accusation.

Right after the 2020 election, Democrats and the left-wing media refloated the nonsensical coup theory.  At the time, I wrote a piece that basically called attention to the fact that there was no evidence of coup plotting – and if there was even the slightest indication – even a hint – the military would never go along with it.  Just like the General said.  And the White House staff would have hauled Trump off in a straight jacket.

There was not any possibility of a coup – or even an attempt to mount one.  The entire notion of a coup was fiction then – and is fiction now.

But that has not stopped Democrats and the media from embellishing the initial phony theory of a potential coup by seeing everything as an attempted coup.  They initially elevated the riot on capitol Hill to an insurrection … then sedition … and finally an attempted coup – an actual attempt to overthrow the government to install Trump as a dictator.

The fact that some people may actually believe the Democrat narratives is more frightening than the fairytale coup.

If you have any view of the history of coups, you will immediately understand that the event of January 6th was not a coup – or even an attempted coup.  In most cases, the military undertake them.  If the military is not driving the coup, they are stopping them.  But they need a real coup to stop – not some imaginative ramblings of an old general.

And did you ever see a coup in which those involved do not come to the seat of government with weapons.  I mean real weapons.  How can you have a respectable coup without a bunch of people shooting at each other.

Outside of a few mentally impaired nutcases, I do not believe that any of the demonstrators – and damn few of the rioters – had an intention of overthrowing the government.  There was no call to arbitrarily install Trump as president-for-life.

They wanted to stop the certification, for sure.  That was out of a belief that the Democrats stole the election – and that future vote counts or court cases would result in a reversal of the popular vote and, consequently, a reversal in the Electoral College.

Contrary to the portrayal of the Democrat and mendacious media, voting against certification of individual states is not … repeat, not … an insurrection or coup.  In fact, it is fairly common.  A number of Democrat legislators voted against the certification of Trump’s 2016 election.  Were they coup-plotters?

Those on the left have taken hyperbole into hyper-space.  Not only are they falsely claiming that there was a real coup attempt – with real coup plotters – but they allege it came perilously close to succeeding. WHAAAT!!!!!

Folks like MSNBC favorite “historian” John Meacham has said as much.  With a straight face, he tells the American people that we nearly lost the Republic on January 6th.  A couple hours of rioting and the Congress was back in business certifying the election of President Biden.

As my readers know, I am not a fan of Trump’s personality. I am a constant critic of his pugnacious and bellicose nature.  I think many of his problems are self-made.  And I have written commentaries about his inexplicable behavior at times.  I think he allowed his personality to distract from his many good accomplishments as President.  I do believe that his personality is a significant part of the reason Democrats made the gains they did in 2018 – and why he is not in the Oval Office today.

But recognizing his shortcomings should not blind us from the Democrats double-fault – their dangerous left-wing agenda and the biased, dishonest and disgusting way they have gone after Trump, Republicans and conservatives – and the people who supported them in the polling booth.

They have used basic fictional scaremongering narratives to claim Trump colluded with Russia to win the 2016 election – and he was even an asset and agent of Russian President Vladimir Putin.  Remember how they claimed Trump was violating the “emoluments clause” by profiting off the presidency?  Then there was the narrative that Trump would start a war to retain power.   He was going to fire Special Counsel Robert Mueller.  And now we have the coup narrative.

But they have not stopped there.   They’re claiming the coup is still in the offing.  They predicted that the coup mobs would return to Capital Hill.  They did not.  And they claimed that the Trump coup-plotters would be taking to the streets in city after city.  They did not.  They are not issuing baseless warning about an August uprising.  I doubt that will happen.  But I do believe if a dozen folks show up on a street corner with signs saying the election was stolen, the corrupt press will play it up like another invasion of Normandy.

What all these foreboding narratives have in common is that they were given maximum publicity over long periods of time – but without any evidence.  And the best evidence that these narratives were propaganda poppycock was that none of them even happened –not even the coup.

There was no coup.  There was no sedition.  And there was no insurrection or coup-plotters apart from POSSIBLY a few delusional nutcases involved in the Capitol Hill riot – and maybe not even them.

We need to keep in mind that conservatives favor limited government – diversified among the several states – and lots of personal freedom.  We do not like authoritarianism.  The left, however, loves big government – the very milieu of authoritarians.  The left prefers one-party rule.  We hear it from people like the Washington Post’s Eugene Robinson, who specifically called for the Republican Party to be “wiped out … crushed” – and that sentiment has been echoed by numerous guests on CNN and MSNBC.  Hmmm.  Now who is sounding like Nazis? … and communists?  I never thought of wiping out the political opposition as an American value.

All the scripts the left has written in the past four years have generally withered away in time.  The coup script would be more in keeping with a Gilbert and Sullivan musical comedy.  It is really quite entertaining if you do not take it too seriously.