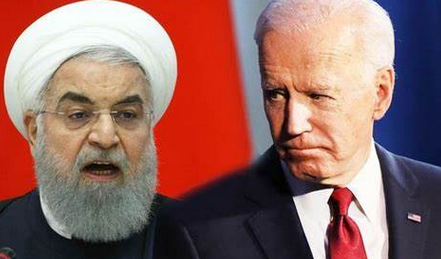 A year ago, the United States’ relationship with Iran was much different.

Under President Donald Trump, the United States exited the Iran Nuclear Deal, reinstated a host of targeted sanctions and took out Qassem Soleimani, a terrorist responsible for the death and maiming of hundreds of Americans in Afghanistan, Iraq and around the world.

The crushing sanctions imposed by President Trump caused financial tensions in Iran, and forced the regime to look inwards to reduce its outward exposure. Iran’s terrorist proxies in Yemen, Lebanon, Syria and Iraq began to falter.

And then Joe Biden moved into the Oval Office.

Now, almost six months into Biden’s term, an emboldened Iran is feeling the wind in its sails. In a rigged election last month, human rights abuser and hardliner Ebrahim Raisi was elected to become the country’s next president.

The outgoing president, Hassan Rouhani, was certainly not the “moderate” the media portrayed him to be. Still, Raisi’s rise to power represents a revitalized Iran that knows it can walk all over the weak and wavering Biden squad.

Meanwhile, the White House appears to be fully pursuing an appeasement strategy.

By removing sanctions on Iran and taking former Iranian officials off of the blacklist, Joe Biden and his team have pandered to Tehran, wasting the crucial diplomatic leverage they inherited from President Trump. Empowering Iran with billions of dollars in sanctions relief will not help the beleaguered Iranian people who have suffered at the hands of a murderous regime.

An emboldened Iran can endanger not only our nation’s security and that of our troops in the Middle East, but also that of our allies. As the predominant state sponsor of terrorism in the world, Iranian aggression can have dire effects on Israel, our greatest ally in the region.

Earlier this week, in another brazen attack on Americans, Iranian-backed militias launched rockets directly at American forces operating in Syria.

The Biden administration hopes that resurrecting the nuclear deal can cause the rogue Iranian government to fall into line. However, the leadership in Tehran will not be deterred by appeasement. Unfortunately, history has proven that our adversaries perceive American largess as weakness.

Without justification, Iran refused to renew an agreement with international nuclear inspectors to keep tabs on its stockpile of nuclear fuel. It also commenced production of enriched uranium metal, according to the United Nations‘ atomic watchdog. Weeks before Biden was sworn in, Tehran began producing 20 percent enriched uranium and uranium metal, knowing full well that the incoming U.S. administration would allow the infractions to slide.

According to media reports, the sixth round of shuttle diplomacy just ended in Vienna without an agreement, but the administration plans to soon resume this waste of taxpayer dollars for a seventh round. President-elect Raisi has said he supports discussions to enter the nuclear deal 2.0, but has vowed not to allow Washington to drag them out. The Biden team’s ineptitude has allowed a mass murderer and homicidal maniac to hold all of the leverage and call the shots.

Tehran has also developed and hoarded increasingly dangerous weapons systems, including deadly drones, far-reaching missiles and a trove of cyber weaponry capabilities. Any U.S. deal with the Iranian regime must recognize and rebuke Iran’s willingness to use these weapons against America and our allies.

U.S. State Department spokesperson Ned Price has affirmed that there is no hard deadline on the Vienna talks—no rush, apparently, as the Iranian regime amasses its dirty deeds. These words came just a week after Biden vowed to Israeli president Reuven Rivlin that “Iran will never get a nuclear weapon on my watch.”

America, our allies and the Iranian people are all paying the price for Biden’s utter fecklessness with regard to the Iranian rulers.