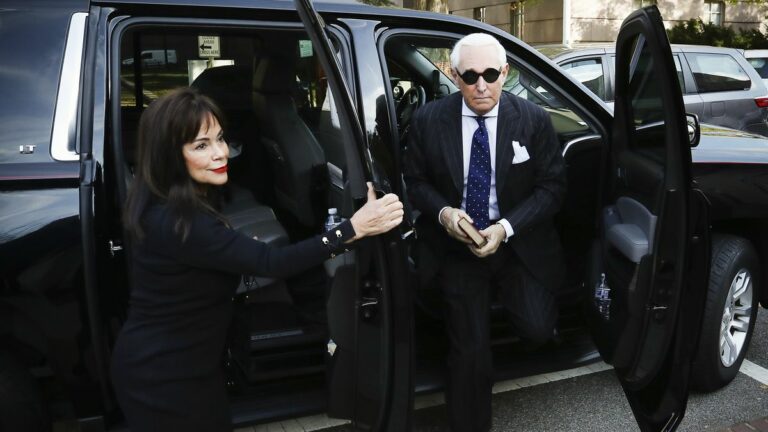 Stone was charged with providing false statements to the House Intelligence Committee about communications having to do with WikiLeaks, obstructing a congressional investigation of Russian interference during the 2016 presidential election, and witness tampering.

Stone was released on his own recognizance until sentencing, which is now slated for Feb. 6, 2020. Federal Judge Amy Jackson said, however, she is not releasing Stone from the gag order she imposed on him earlier this year, and stated that he was still bound by that order as a condition of his release.

President Trump railed against the verdict minutes after it was announced, a judgment that came just as the second in a series of public impeachment hearings was still in progress.

“So they now convict Roger Stone of lying and want to jail him for many years to come. Well, what about Crooked Hillary, Comey, Strzok, Page, McCabe, Brennan, Clapper, Shifty Schiff, Ohr & Nellie, Steele & all of the others, including even Mueller himself? Didn’t they lie?” he tweeted. “A double standard like never seen before in the history of our Country?”

During the trial, several witnesses highlighted how Trump campaign associates were eager to gather information about emails the U.S. said were hacked by Russia and then provided to WikiLeaks. Stone was regarded as an “access point” to WikiLeaks, due to his frequent boasts of having insider access to WikiLeaks’ founder, Julian Assange.

Federal prosecutors argued that Stone intentionally lied about his use of intermediaries to get information about WikiLeaks’ possession and release of hacked Democratic National Committee and Hillary Clinton campaign emails. They also said Stone hid the truth to protect the Trump campaign.

During the 2016 campaign, Stone had mentioned in interviews and public appearances that he was in contact with Assange through a trusted intermediary and hinted at inside knowledge of WikiLeaks’ plans.

The outspoken Republican operative, 67, was indicted in January as part of special counsel Robert Mueller’s probe into whether Russia colluded with the Trump campaign.

Jurors began deliberating Thursday after about a week of testimony, including from Trump campaign chief executive Steve Bannon, who said Stone boasted about his ties to WikiLeaks and its founder, Julian Assange, and alerted the campaign to pending batches of damaging Democratic emails.

He faces up to 20 years in prison at his sentencing Feb. 6, but his sentence will likely be much lighter.