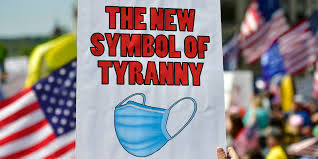 Oh, the battles we will choose here in the Seventh Month of March, 2020.

In the riot-free portions of the country these days, the battles tend to be about lockdowns and mask mandates rather than the elimination of law enforcement. We all need something to be angry about, after all.

There have been a lot of stories of mask-shaming mobs in retail establishments going after a lone person not wearing one. We now have an example of the reverse happening thanks to our friends in — of course — Florida:

A rowdy group of anti-maskers marched through a Target in Florida and shouted at other shoppers to “Take off that mask,” viral video shows.

Footage on Twitter Tuesday showed the crowd parading around the aisles of the store — located in Ft. Lauderdale, according to HuffPost — and disregarding the store’s face mask requirement as one of them exclaims, “We’re not going to take it anymore!”

“Anti-maskers in Florida invade a Target,” wrote a user who shared the video, which has received more than 6.6 million views as of Wednesday afternoon.

I’m rather “meh” in my approach to covering my face for the alleged common good. It’s the lockdowns that annoy me. If I have to wear a mask while walking to my table at a bar I like but can remove it to drink, I get over it. I’d rather the bar be open than worry about the mask situation. I’ve got bigger COVID-related hills to die on.

The responses to the tweet above are a nice little trip into what’s probably a permanently divided America. There are a lot from the pro-mask crowd, who act like they’re walking around with some sort of Captain America shields on their faces which can protect them from anything. Some of them even accuse the flash mob of being “sheep,” which is hilarious coming from people who blindly follow COVID-era government authority that almost always appears to be winging it.

That’s a perfect snapshot of the Republic right now: leftists are willing to yield to petty tyrants while those on the right are saying, “Hey, maybe we pump the brakes here a little.” I’m so old I remember when American leftists were highly distrustful of governmental authority.

These laws and rules regarding various COVID protections are going to be a fact of life for a while. My problem with all of them is that they are all being forced upon us in the name of SCIENCE but the science seems to change almost weekly. There is a randomness to it all that makes it easier and easier to stick to my belief that most of the elected officials making up the rules are far more interested in imposing their wills than in actually saving any lives.

I truly believe that the only reason Joe Biden keeps wearing a mask everywhere is to keep the COVID panic ratcheted up so that it can be used as an eleventh-hour excuse to bail on the debates. Yeah, I’m skeptical of the motivations of any Democrat, but it’s pretty transparent that the COVID freakout became a part of the Dems’ election-year plans as soon as the pandemic hit.

The easiest way to avoid all of this drama is to simply stay home, a course of action that I have adopted, and can wholeheartedly endorse.

The Riots: More Questions than Answers