Portland Mayor is Fed Up with the Protests 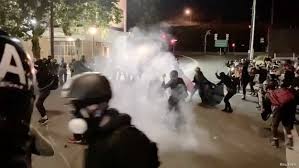 Portland Mayor Ted Wheeler (D) has had enough of the protests.

“The community is sick and tired of people engaging in criminal destruction and violence and doing it under the guise of some noble cause,” said Wheeler on Monday following an incident at the courthouse that resulted in property damage and several arrests. The city has already had to erect fences and call in federal officers to protect the courthouse after spending $1.5 million to repair damage caused by protestors.

Scott Erik Asphaug, a lawyer who works inside the courthouse, says he isn’t “intimidated” by the graffiti and broken windows. “We do not confuse the voices of the many with the shouts of the few who hope to hold our city hostage by petty crime and violence.”

The protests in Portland began last summer with the killing of George Floyd.

They have occurred on a regular basis ever since. More often than not, the incidents involve arson, property damage, and assault.

Ironically, the protests in Portland are calling to defund the police even as they commit crimes that require police interference. But according to authorities, the perpetrators are part of a small, anarchist organization that has nothing to do with the peaceful protests that also take place in the city.

“This was not a protest group,” Assistant Police Chief Chris Davis confirmed. He was referring to the incident at the courthouse last week. “This was a group of people who have come to believe that they are entitled to damage other people’s property, threaten community members, and assault police officers.”

Police were able to control the situation at the courthouse using a technique called “kettling.”

This is when police corral protestors into a small area and identify them one by one as they escort them out. Using this method, police were able to identify and confiscate an array of weapons. They found smoke bombs, loaded guns, a dagger, a slingshot, and spray paint.

“My observation is that tactic was used successfully, it was used peacefully, and it ended what could have been further criminal destruction in the city,” said Wheeler.

The ACLU says kettling is “aggressive” and “indiscriminate.” Though in my opinion, anyone who participates in protests should prepare for the worst.

“I feel bad for the peaceful protestors, but I think you should know if you are in a situation where people start doing things that are illegal, your First Amendment rights will not magically save you from being asked to give identification,” explains Laura Appleman, a law professor at Willamette University.

Moving forward, Wheeler has urged residents to denounce the violence no matter what their political views. “I don’t care if you’re on the political left or the political right. If you’re engaged in acts of violence or criminal destruction, that is unacceptable,” he said.

Wheeler is working closely with police and the District Attorney’s office to hold criminals responsible. He has asked lawmakers to approve harsher penalties for protestors. “My good-faith efforts at deescalation have been met with scorn by Antifa and anarchists bent on destruction…It’s time to push back harder.”

Should Doctors Be Worried About Biden’s Fall?