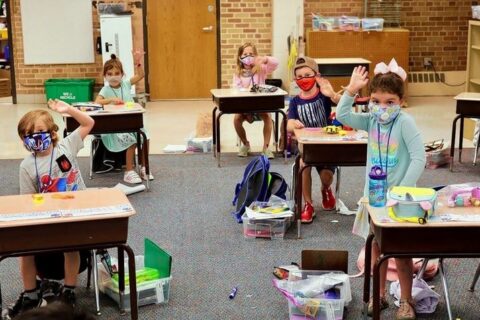 Recently release emails show the American Federation of Teachers, which is the second-largest teacher’s union in the nation, lobbying the Centers for Disease Control and Prevention from recommending that schools could fully and safely reopen.

Americans for Public Trust, a conservative watchdog group, obtained the emails by using a Freedom of Information Act request and then gave the emails to the New York Post.

The news is particularly significant because the American Federation of Teachers donated almost $2o million to Democrats in the 2020 election, while CDC Director Dr. Rochelle Walensky claimed their guidance was “free from political meddling.”

Teachers’ unions have been adamantly against a return to in-person learning despite health officials saying schools are safe for both students and adults.

According to the New York Post, the emails “show a flurry of activity between CDC Director Dr. Rochelle Walensky, her top advisors and union officials — with Biden brass being looped in at the White House — in the days before the highly-anticipated Feb. 12 announcement on school-reopening guidelines.”

Thank you again for Friday’s rich discussion about forthcoming CDC guidance and for your openness to the suggestions made by our president, Randi Weingarten, and the AFT.

We were able to review a copy of the draft guidance document over the weekend and were able to provide some initial feedback to several staff this morning about possible ways to strengthen the document. … We believe our experiences on the ground can inform and enrich thinking around what is practicable and prudent in future guidance documents.

Two days later, another email shows Trautner thanking Walensky for her “committment (sic) to partnership” and Walensky’s “genuine desire to earn our confidence.”

Four days later, the emails reference a call that took place between Walensky and Weingarten.

With the CDC preparing to write that schools could provide in-person instruction regardless of community spread of the virus, Trautner argued for the inclusion of a line reading “In the event of high community-transmission results from a new variant of SARS-CoV-2, a new update of these guidelines may be necessary.” That language appeared on page 22 of the final CDC guidance.

The AFT also demanded special remote work concessions for teachers “who have documented high-risk conditions or who are at increased risk for … COVID-19,” and that similar arrangements should extend to “staff who have a household member” with similar risks. A lengthy provision for that made it into the text of the final guidance.

Both the CDC and American Federation of Teachers defended their work together on the guidance.

“As part of long-standing best practices, CDC has traditionally engaged with organizations and groups that are impacted by guidance and recommendations issued by the agency. We do so to ensure our recommendations are feasible to implement and they adequately address the safety and wellbeing of individuals the guidance is aimed to protect. These informative and helpful interactions often result in beneficial feedback that we consider in our final revisions to ensure clarity and usability,” a spokesman for Walensky said.