Who is more popular? DeSantis VS Trump 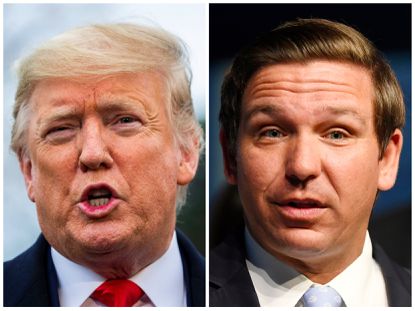 According to the left-wing media spin machine, the Republican Party has become a cult-of-personality devoted to former President Trump.  I have written a couple of commentaries refuting that claim.  Now we see some real preliminary evidence. A recent presidential straw poll by the Western Conservative Summit had Trump in second place as the preferred Presidential candidate for 2024.  First place in the presidential straw poll went to Florida Governor Ron DeSantis.

In another recent commentary, I opined that DeSantis would be far and away the leading candidate if Trump did not make a run for a non-consecutive second term.  I did not think DeSantis would run if Trump were to enter the race. But I am not at all sure that Trump will be a candidate for President in 2024.  In fact, I tend to believe he will not be.

The contest between DeSantis and Trump was verrrrry close. But what is also significant is how far DeSantis was ahead of the rest of the potential GOP field in the presidential straw poll.  DeSantis was viewed favorably by 74 percent of the responses, while Trump came in at 71 percent.  But DeSantis bested third-place Senator Ted Cruz by 35 percentage points.

It was also noteworthy that former Vice President Pence received a respectable 20 percent show of support.  This would suggest that those who call him a traitor is an exceedingly small number – again busting the myth advanced by the elitist media that Pence has no place in the Republican Party.

What makes this presidential straw poll a bit of a harbinger of things to come is that DeSantis was the number one choice even assuming that Trump was in the race.

For sure, it is not a big poll – and there is a lot of time before now and 2024. But DeSantis winning this presidential straw poll is evidence that Republican voters will be considering a lot of possibilities in the coming months.  They will not be marching in lockstep behind Trump as the press would have Americans to believe.  Trump will have to make his case to the voters if he runs.  He does not have a lock on the nomination.

Once we get into the Republican primaries for the 2024 election, I am betting that the current political narrative – that Trump is leading a coup and Republican voters are nothing more than political zombies — will have gone the way of the Democrats’ “Russian Conspiracy” conspiracy theory, the highly reported firing of Special Counsel Robert Mueller myth and the totally inaccurate Lafayette Square reports.

It looks like 2024 is shaping up to be a two man race with one or the other not running.