The Plan to Reinstate Donald Trump 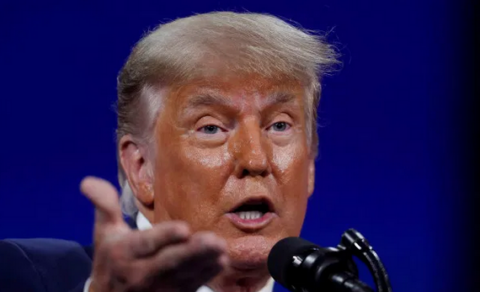 Attendees of the Conservative Political Action Conference (CPAC) in Dallas have been handed cards outlining a 7-point-plan to reinstate Donald Trump as president ‘in days, not years.

Forbes reporter Andrew Solender posted an image of the card on Twitter.

The cards seemed to have been made by a group called Patriots Soar, which was not affiliated with the event organizers.

Donald Trump as Speaker would then call for a vote to impeach, charge, and remove “imposters” President Joe Biden and Vice President Kamala Harris.

As the Speaker of the House is third in the line of presidential succession, Trump would then take up the presidency again in this highly improbable scenario.

The plan hinges upon Republicans regaining control of the House, which they plan to do by pulling back the curtain on “the horror show” of the Democrat Party, causing groups such as the Black Caucus to “flip” sides.

The card links to a website that elaborates on the strategy to reinstate Trump and claims to have proof connecting the Democrat party to satanic sacrifices.

The messaging alludes to popular theories that accuse the Democrat party of secret satanic abuse. A recent study found that around a quarter of Republicans believe that Satan-worshiping pedophiles control the US government.

The idea that Trump will soon be reinstated as president has been popularized by prominent supporters, including MyPillow CEO Mike Lindell and the lawyer Sidney Powell.

The card also refers to the theory that the 2020 election was fraudulent, which has been rejected dozens of times in court.

CPAC, an annual gathering of top US conservatives, is taking place in Dallas this weekend. Donald Trump is scheduled to speak on Sunday.

Other speakers include Donald Trump Jr. and other Trump allies such as former Homeland Security Secretary Chad Wolf and Rep. Madison Cawthorn of North Carolina.