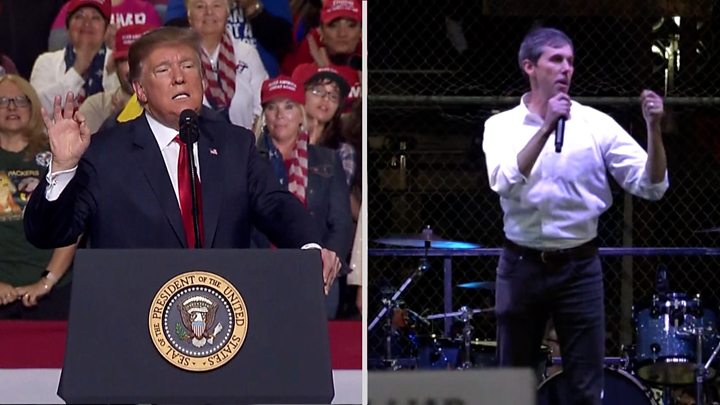 President Trump has fired off a scathing tweet tearing into 2020 Democratic hopeful Beto O’Rourke ahead of the President’s scheduled visit to El Paso.

Trump’s angry tweet was lobbed at Beto late Tuesday night, and directed at comments O’Rourke has made since last weekend’s shooting in Beto’s hometown of El Paso, that that left 22 dead.

Over the past several days, O’Rourke has slammed the president, upon who he has placed blame for the massacre. The former congressman declared that Trump is a “racist” and compared his language to Nazi Germany’s Third Reich. He also compared Trump’s North Carolina rally– where the “send her back” chant took place—to “Nuremberg.”

“That is a leader reveling in the hatred and the racism of the people that he purports to serve and to lead,” O’Rourke said Monday following the weekend’s two deadly shootings.

Trump blasted O’Rourke in his response, claiming the Democratic candidate is using a “phony name” in an attempt to appeal to voters.

“Beto (phony name to indicate Hispanic heritage) O’Rourke, who is embarrassed by my last visit to the Great State of Texas, where I trounced him, and is now even more embarrassed by polling at 1 percent in the Democrat Primary, should respect the victims & law enforcement – & be quiet!” Trump wrote in his late-night tweet.

O’Rourke responded to Trump’s tweet and double-downed on his claim that Trump is responsible.

“22 people in my hometown are dead after an act of terror inspired by your racism,” he tweeted. “El Paso will not be quiet and neither will I.”

The “trouncing” he gave Beto that Trump mentioned in his tweet, referred to the rally the President held in El Paso back in February, amid the national debate about the migration crisis, boasting his crowd size in comparison to O’Rourke’s, who held a competing rally on the same night.