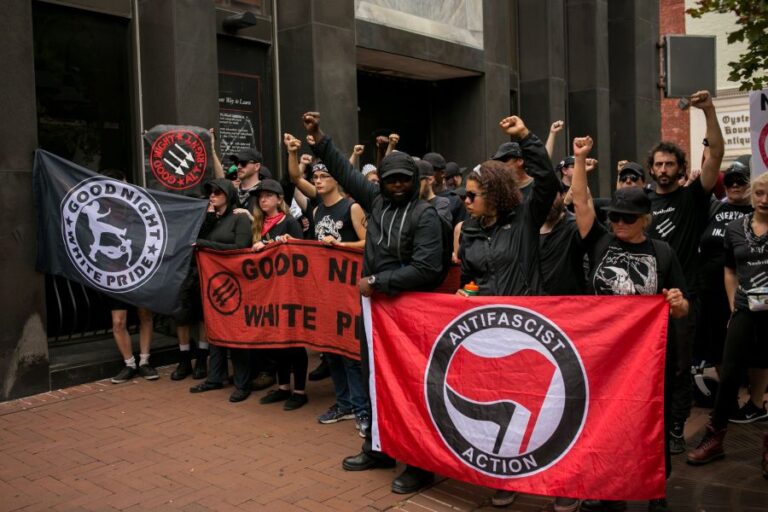 Following yesterday’s MAGA March in Washington D.C. which drew around 150,000 to 200,000 Trump supporters, marauding groups of far-left Antifa-BLM extremists terrorized and attacked supporters of the US president — including women, children, families, and the elderly — as they walked back to their cars and accommodations.

A plethora of video clips showing the far-left extremists terrorizing, physically assaulting, and hurling incendiary explosives at Trump supporters and restaurant-goers were captured and have been circulating on social media. The incidents have been mostly overlooked by most major networks and left-wing publications, but President Trump has retweeted a number of the following videos.

One mob of extremists surrounded, physically intimidated, and hurled racial epithets at an elderly couple as they walked down the street. Some members of the group, at one point, even tried to steal a Trump flag out of the hands of the elderly female.

In perhaps what was the most violent and shocking attack captured on video at the event, a man walking away from what appears to have been a volatile situation was knocked out after being hit from behind by a hooded black man. After losing his footing and falling to the ground, two black females immediately begin stomping on the man’s head before others come to his aid.

A young black female leftist attacked a middle-aged white woman from behind – sucker-punching her in the back of the head – as the she walked with several other women and pro-Trump demonstrators.

In another instance of thuggery and intimidation, the mob followed and harassed a family who were in the process of leaving the event, causing the young children to break down in tears.

Another video posted to social media shows a black female Trump supporter with her young daughters being aggressively harassed and physically intimidated by BLM-Antifa activists near the White House. A man nearby who attempted to shield the mother and her daughters was then attacked by multiple far-left activists.

After a group of Trump supporters were forced to walk through a mob of Antifa, BLM, and other left-wing extremists due to police blockades, one man carrying a Trump flag was sucker-punched twice in the back of the head by a black woman.

In another clip, a mob of BLM-Antifa extremists can be seen attacking a young Trump supporting couple. While trying to walk through BLM Plaza, the young couple were assaulted and had eggs and unknown liquids thrown at them. The young man can be seen trying to shield his crying girlfriend as the mob attempts to surround them.

Members of Antifa and BLM also attacked restaurant-goers who were eating dinner outside near BLM Plaza, hurling incendiary devices and projectiles at them.

In a separate incident at another restaurant, the marauding band of BLM-Antifa extremists can be seen terrorizing patrons trying to enjoy their dinners with friends and family. Members of the mob destroyed property at the restaurant, physically intimated guests, and shouted at people with bullhorns.