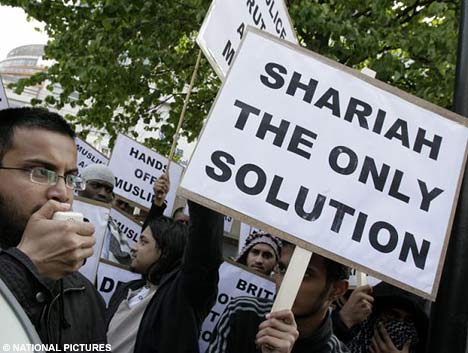 According to a new study from the prestigious Ifop polling institute, a majority of Muslims under 25 believe that Sharia is superior to the law of the French Republic.

French magazine Valuers Actuelles reported on the study, which was conducted on behalf of the Comité Laïcité République, which highlights the growing gap between Muslims and other French people regarding their relationship to secularism.

Currently, 57 percent (10 percent more than in 2016) of French Muslims in the under-25 age category believe Sharia comes before the French Republic’s law while barely 15 percent of Catholics believe that the rules of their religion should come before French law.

Likewise, two in three Muslims are opposed to the idea that teachers can show caricatures of religious figures to their students, while 75 percent of French people and even 80 percent of Catholics are in favor of doing so.

The same is true for the vast majority of the questions asked in the survey. Each time, the opinion of Muslims was diametrically different from the answers of non-Muslim French respondents, giving the impression of two communities that have little in common.

For example, 75 percent of Muslims are also strongly in favor of wearing conspicuous religious symbols, whether it concerns parents accompanying a school trip, university students, private-sector employees, or public service employees. However, Catholics, as well as non-believers, are fiercely opposed to it.

In the case of teaching Arabic and mother tongues in public schools, 82 percent of Muslims are in favor of it, while 18 percent of Catholics and 32 percent of non-believers are against it.

Furthermore, barely 58 percent of Muslims were in favor of signing a declaration of following the values of the Republic when receiving public subsidies. On the other hand, 85 percent of non-believers, as well as 92 percent of Catholics, are in favor of this idea.

When it comes to specific hours for women in municipal swimming pools, 81 percent of Muslims would agree with it, against 16 percent of Catholics and 24 percent of non-believers, who disagree.

As for the appointment of an observatory body which would oversee the influence of religious fundamentalists in society, only 35 percent of Muslims approve compared to 76 percent of Catholics and 77 percent of non-believers.

The Ifop study shows that more than ever, Muslims — and not just Islamists — seem to aspire to a lifestyle radically opposed to that of other French people.

“Today, some tend to present Islamist terrorists as ‘lone wolves’, fundamentalists whose literal and radical view of the Quran is not at all representative of the point of view of Muslims. Nevertheless, this survey shows that a significant fraction of Muslim youth shares with these Islamists the idea that the laws decreed by their religion must take precedence over French law,” pointed out François Kraus, director of the Ifop institute.

And the Islamic terrorist attacks that have shaken France in recent weeks have not changed this trend.

“Ultimately, opinions on the major secular laws and the relationship to secularism are fairly rigid. The attack did little to change things,” Kraus added.

The gap between Muslims and the rest of the French, however, is not the only worrying factor in this poll. Indeed, for each question asked, the study showed that young people, no matter what their faith is, are less defensive of secularism than their elders.

Kraus sees this as an “Americanization” of values.

“Religion is seen today by young people as part of identity, like skin color, and therefore cannot be criticized in the same way as political opinion, for example. We are witnessing the triumph of the notion of respect over the freedom to criticize the religious values ​​of others,” he explained.