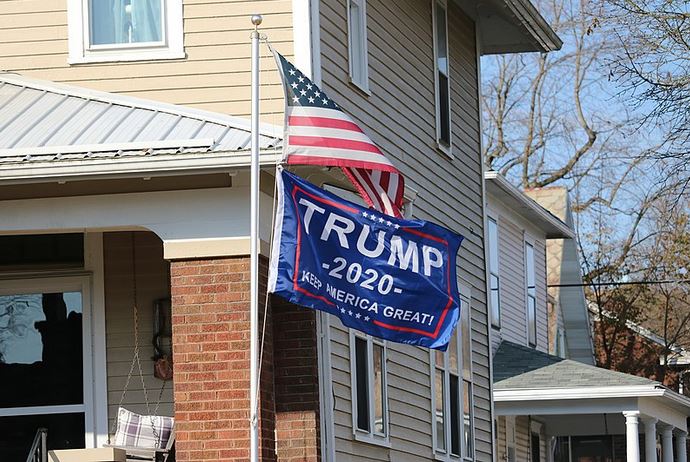 A Trump supporter in Rocklin, California has filed a restraining order after neighbors allegedly taunted him and his children after the results of the presidential election.

Michael Mason told CBS Sacramento, “I didn’t want to do this. They’re making me have to do this.” He showed a copy of the order, which would require the neighbors to stay at least 100 feet away from his home, saying, “This is a civil harassment restraining order … I’m tired of getting harassed all the time. My kids don’t want to come outside.”

Video shows “Black Lives Matter” and “LGBTQ” written in chalk outside Mason’s home. Other video shows taunting like “Are you crying? USA!” according to The Daily Mail.

Mason said, “I went down there and asked them, ‘Well, why didn’t you write this in front of your house, or anybody else’s house? Why mine?’ And they just laughed at me.”

Neighbor Sean Millard, who lives between Mason’s home and the other neighbors, commented, “It’s absolutely insane. 2020 has been kind of a crazy year.”

“The neighbors Mason filed the restraining order against declined to comment,” MSN reported.

The California Court system writes: “You qualify for a civil harassment restraining order. You qualify if: The person you want to restrain has stalked, harassed, sexually assaulted, or threatened you with violence; and the person you want to restrain is your: neighbor, roommate, friend, family member more than 2 degrees removed, like an aunt or uncle, a niece or nephew, cousins, and more distant relatives, or another person you are not closely related to.”

The California Request for Civil Harassment Restraining Orders states,“Harassment means violence or threats of violence against you, or a course of conduct that seriously alarmed, annoyed, or harassed you and caused you substantial emotional distress. A course of conduct is more than one act.”

Mason said he hopes that the restraining order will keep the peace until he and his family move.

As The Daily Wire reported on Tuesday, pop icon Katy Perry was slammed by leftists after urging Biden supporters to reach out to Trump supporters. She tweeted on Sunday, “The first thing I did when the presidency was called is text and call my family members who do not agree and tell them I love them and am here for them. #FamilyFirst. Call your family today. Happy Sunday.”

Along with the influx of criticism she received from democrats, other leftist figures of note also chimed in with their desire to punish Trump supporters.

“Is anyone archiving these Trump sycophants for when they try to downplay or deny their complicity in the future? I foresee decent probability of many deleted Tweets, writings, photos in the future,” tweeted Rep. Alexandria Ocasio-Cortez (D-NY).

“If you’re a Trumper I hope the pain and anxiety you feel now is excruciating. You voted against America and for a cult leader who has no redeeming or admirable qualities. He’s a cretin who cares nothing about this country and you don’t either. You deserve all the pain and more,” tweeted former MSNBC host Toure.