Biden Administration Wants to Ban Police Officers from All Schools

This is their solution to student discipline... 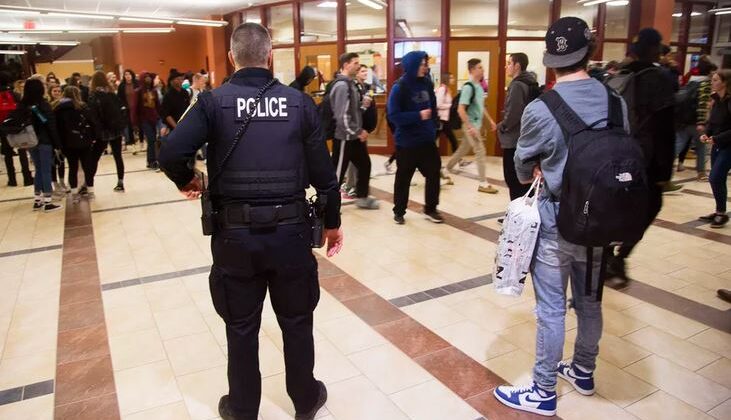 Gupta is the CEO and President of the Leadership Council on Civil and Human Rights. Her organization is recommending that law enforcement officers be banned from all schools.

The organization released a report titled, “New Era of Public Safety: A Guide to Fair, Safe, And Effective Community Policing.” It calls to “end the use of police in schools as a solution to student discipline.”

“In addition to advocating for more funding for community policing initiatives, community members should advocate for investment in social and community services that improve public safety, such as after-school programs, street lighting, and homeless shelters,” the report also says.

Gupta says that school districts are “increasingly turning disciplinary matters over to school police,” which, she claims, leads to more excessive force used on students of color, students with disabilities, and students in the LGBTQ community.

The report says that any “antagonistic interaction” between a police officer and a student is a disruption to the school’s learning environment. This violates “the principles of community policing” that the organization is advocating for.

“Police officers should not have a role in student disciplinary matters,” the report reads.

Gupta also demands that all tax-payer funded public schools refuse to comply with the Department of Homeland Security when a student is illegally living in the United States.

“Communities should ask school districts that retain school police whether they share information with the U.S. Department of Homeland Security Office of Immigration and Customs Enforcement (ICE) or with state or federal gang task forces,” the report says. “They should ensure existing agreements between police departments and schools don’t give officers access to student records.”

How the Media Made Covid-19 Worse