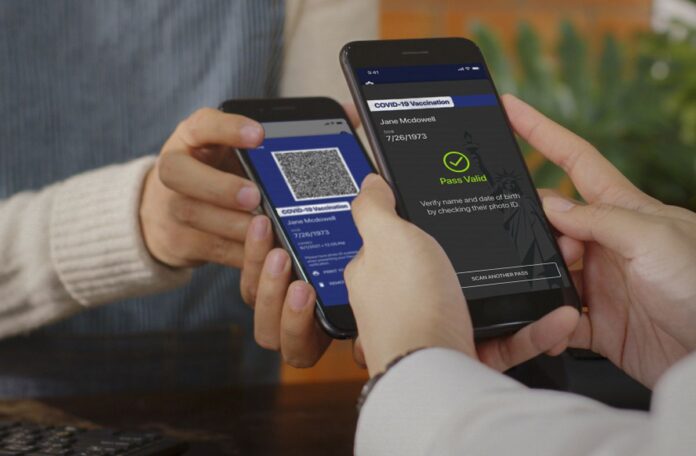 Rep. Warren Davidson has just introduced a bill to ban the federal government from issuing any kind of vaccine passports. The Ohio Republican’s bill would also severely restrict states from doing so and ban private businesses from requiring proof of COVID vaccination, arguing that such requirements represent “an inherent violation of civil liberties.”

“They’re not really providing a rational basis for discriminatory activity – they’re busy separating healthy people from other healthy people on the presumption that people without a vaccine are not healthy,” Davidson, R-Ohio, said of vaccine requirements in an interview with Fox News. “It’s a violation of civil liberties.”

A copy of Davidson’s “Vaccine Passport Prevention Act” was first obtained by Fox News. According to the outlet, it would bar the federal government from issuing any form of vaccine passport; ban states from doing the same as a condition of receiving federal funds; and bar businesses connected to interstate commerce from requiring “any patron or customer to provide any documentation certifying COVID-19 vaccination, or post-transmission recovery, as a condition” of service. This goes significantly further than bills introduced earlier this year, including by Rep. Andy Biggs, R-Ariz., that would only prevent the federal government from issuing vaccine passports.

It is highly unlikely to pass the Democrat-controlled House of Representatives or ever become law. But it does represent growing opposition from Republicans to vaccine passports that’s been reflected in similar bans in several states.

Davidson’s bill comes as vaccination rates increase across the country, and even areas that had the most restrictive virus rules are returning to pre-pandemic normalcy. This is causing states, schools, businesses, and public health officials to grapple with whether to require vaccines – especially in places where large numbers of people will congregate – and how to enforce such a requirement if they do.

The penalty for businesses that violate the ban on verifying coronavirus vaccine status under Davidson’s bill would be a two-year ban on receiving federal funds or grants. Individuals could also sue a business that denies service over vaccine status.

“If a company, a business wants to take steps to keep their workers and their passengers safe, I would think that, from a government perspective, we want to do everything we can to encourage that,” Buttigieg told KDFW FOX 4 in Dallas on Monday. “And that’s certainly our view at the federal level.”

Others who oppose vaccine passport bans, especially the provisions banning private businesses from turning away unvaccinated customers, argue that doing so is a matter of property rights for business owners. But Davidson says he sees this issue as more of a civil rights issue than one about property rights.

“They were making the same arguments on civil rights in the ‘60s when they said, well, I don’t have to let anyone stop at my gas station or my hotel or my restaurant, or ride where they choose on the bus – it’s my bus,” Davidson told Fox News. “And we said, ‘No, you have to have some reasonable public accommodation.’”