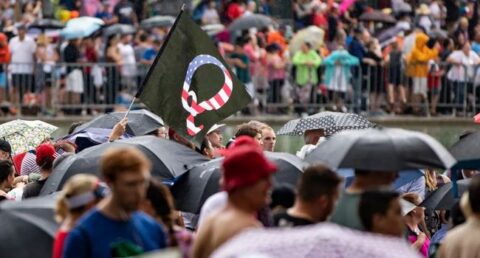 The report, titled “Adherence to QAnon Conspiracy Theory by Some Domestic Violent Extremists,” was provided to lawmakers at the request of Democratic New Mexico Sen. Martin Heinrich.

The FBI believed that while the inauguration of President Joe Biden and the disappearance of the leader of QAnon saw some adherents leave the movement, others have decided to take things into their own hands. According to the assessment, followers to seek violence instead of “continually awaiting Q’s promised actions which have not occurred.”

“We assess that some [domestic violent extremist] adherents of QAnon likely will begin to believe they can no  longer ‘trust the plan’ referenced in QAnon posts and that they have an obligation to change from serving as ‘digital soldiers’ towards engaging in real world violence—including harming perceived members of the “cabal” such as Democrats and other political opposition—instead of continually awaiting Q’s promised actions which have not occurred,” the assessment says.

QAnon is a conspiracy theory that broadly believes that former president Donald Trump is waging a secret war against a group of Democratic and Hollywood elite who are running a child sex trafficking ring. It has always claimed it is a non-violent movement, but as the FBI report points out, there have been several incidents of QAnon believers committing acts of violence.

QAnon played a central role in the assault on the Capitol on Jan. 6 and the FBI said this “underscores how the current environment likely will continue to act as a catalyst for some to begin accepting the legitimacy of violent action.”

The agency says it has arrested more than 20 self-identified QAnon adherents who participated in the Jan. 6 attack.

The FBI had worked with Congress to produce the unclassified report in recent months, after a leaked memo had shown the FBI viewed QAnon as a potential terrorist threat last year.