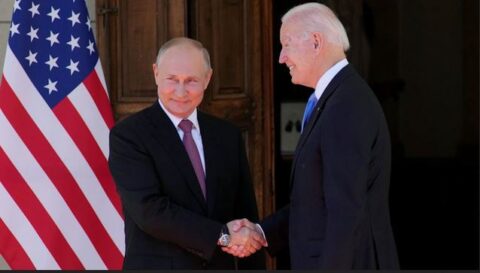 With everything happening across the United States and world today, it can feel nearly impossible to wrap your mind around the events of the moment. As we focus on standing against the forces of division within our own country between our schools, our states, our news, our social media, our election and our laws, countries around the world are taking serious action towards potential war around the world. Today, Biden is meeting Russian President Putin in Geneva, Switzerland to discuss the state of our current relations.

Biden seems to be playing his usual role of being a goofy leader and has already been reported to have stumbled through the talks. He said that Russia is a “great power” and nodded in approval when asked if he trusts Putin. Far removed from his previous recent comments that Putin is a “killer” with “no soul.” Most likely due to the obvious reasons that Biden is hardly ever allowed to freely speak in public without a teleprompter, further talks today will include no public press conference between the two leaders.

Biden’s meeting with Putin as the Russian Navy conducts the largest military exercises in the Pacific Ocean since the end of the Cold War.

Less than 500 miles away from Hawaii, Russia is running drills just as the meeting between the two Presidents is happening. 200 miles east of Hawaii, the United States is also conducting Navy strike force exercises. The U.S. sent fighter jets in reaction to the military drills from Russia so close to Hawaii, with two F-22 Raptor jets released from a base in Pearl Harbor. The release resulted in no interceptions for the time being as talks between the two Presidents resumed.

Back in Taiwan, 28 Chinese military aircraft including fighters and nuclear capable bombers flew over the small island nation in a show of force. This comes after a meeting between the G7 nations Sunday and their decision to stand together against threats from China. China continues to claim that Taiwan is a red line that no opposing country should try to cross. It wants a territorial power claim over the nation. This was the largest air incursion of Taiwan to date.

The G7 consists of the nations of the United States, Britain, Japan, Germany, Italy, France and Canada.

They call came together in unity to stand against China, opposing human rights violations, religious persecution, trade theft and talks of control over neighboring nations. Together they have demanded a true and thorough investigation of the origins of the Covid-19 pandemic. Furthermore, the U.S. and Britain have signed a new Atlantic charter framing their stance and strengthening relations to stand against communist China’s influence and power grabs in the area. Less than a month ago, China went far enough to threaten to bomb Australia with missile strikes for protecting Taiwan. Chinese media has also recently threatened war with the United States. It used its media propaganda to further promote an attack on any relations with Taiwan’s independence worldwide.

It is important to keep in mind that July 1st is the 100 year anniversary of the Chinese Communist Party.

This ‘100 Year Marathon’ plan of the CCP to take control of the world order is coming to a climax of thought as the nations of the world will have to decide exactly how to handle these long-term ambitions from the adversary nation. Beijing has been conducting a massive crackdown on its own people. It took its own citizens from rural areas and forced them into the cities in action to completely eliminate all political dissent within the nation by June 20th in preparation for their July 1st anniversary. This alone should be raising red flags for all people on Earth, everywhere.

But this isn’t all that is happening…

Israel, even during an abrupt and opposed change in government structure as parties within the nation transition, has been forced to defend itself against Hamas once again. Incendiary balloons were thrust upon the ally nation of Israel and, in response to the attack, has conducted additional airstrikes on Hamas. This has ended the ceasefire that has only lasted 11 days between the two opposing people.

Also, on top of all of that, Iran has sent two ships across the Atlantic Ocean towards Venezuela. This potentially places additional threats south of the United States.

Looking at the meeting with Putin and Biden, let us hope that peace can come from the conversation. When it comes to history, Russia helped us win World War 2. If World War 3 begins, it would be best for the freedom of humanity if they stood beside us against the CCP. If for any other reason, for the freedom of religion and thought for their own people as well. But if they choose to stand with China against the United States and our allies, that is the true nightmare scenario for the free people of Earth. It could result in a potential suicide of all nations across the globe. No one should want that. No one should want any war for any reason, but like World War 2, sometimes the world needs force to keep a potential future for the good of humanity.

As all nations watch the events on the world’s stage from a razors edge, the pressure has certainly turned way up to a degree unseen in modern times. All we can do is hope while praying for the best and prepare to deal with the worst of the rest.