Class will now be based on Mask Use 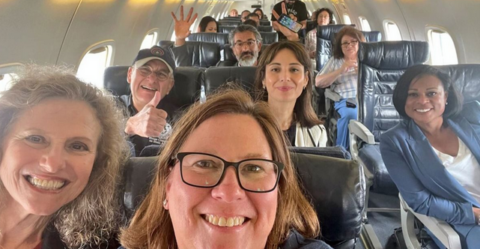 The Democrats in the Texas state legislature must have been thinking of a line from a song from the Broadway musical “A funny thing Happened on the Way to the Forum” – “… tragedy tomorrow, comedy tonight …”

This comedy did not take place at the Forum, but at the Capitol Building in Washington, D.C.  It actually started in Austin when the entire Democrat membership fled the state legislature – and their sworn duties – to travel to the nation’s capital to become mock congressmen.

They abandoned their job to deal with election reform legislation in their own general assembly to support election measure in Congress.  The entire Democrat legislative caucus of Texas legislature skipped out like a bunch of truant school children.

And this is not the first time they did it.  Near the end of the regular session, they blocked all the work and all the legislation of Texas in an attempt to stop the passage of various election reform measures – simply because they did not like them.

That action was silly because they knew that they were just delaying the passage of the legislation.  They knew that Texas Governor Greg Abbott would call a Special Session to deal with legislation the Democrats temporarily blocked.

Despite all that, the crazy Democrats did it again in the Special Session.  And since they have bolted at the beginning of the Special Session – as opposed to the end of the regular session – the Democrat legislators will have to hide out for the next 30 days.

If they hold out that long, Abbott has promised to call another Special Session … and another … and another … until the next election in 2022 unless the Democrats give up their childish game.

Good comedy often relies on absurdity – and the Texas Democrat legislators are providing an abundance of that.  They claim that their extreme action is necessary to save democracy – to prevent the collapse of the American Republic.  If they go back and do their job – and the Texas legislature passes the election reform laws – they portend the end of America.

That is as absurd as the victory over America by the forces of Grand Fenwick (a squad in men in Medieval armor) in the move “The Mouse That Roared.”

You see what I mean by absurdity making great comedy?

If you were to make a movie of this Texas Democrat folderol, could you conceivably do anything but a comedy? Legislators escaping in private aircraft to get out of town before the posse arrives.  The governor and the remaining members of the legislature issuing arrest warrants to force the errant legislators back into the chamber.

I can imagine scenes reminiscent of a Max Sennett comedy as Texas officers are tracking down individual legislators.  Imagine seeing the absentee lawmakers being dragged into the legislative chamber, which will then be locked like a jail to keep the Democrats incarcerated until the business of the state can be completed.

This is such a hilarious funny movie, that maybe I will write the script.  And yes, I do write scripts on occasion.

In the end – movie or real life – the Democrats will fail to stop the Texas election legislation.  It will be passed and signed by Governor Abbott.  So, what is the point?

Comedy does not need a point – other than to provide a good laugh.  And so far, that is all that the Texas Democrat legislators have provided.  No achievable objective.  No point.  Just a lot of hearty laughs.  But one should always appreciate a good laugh.