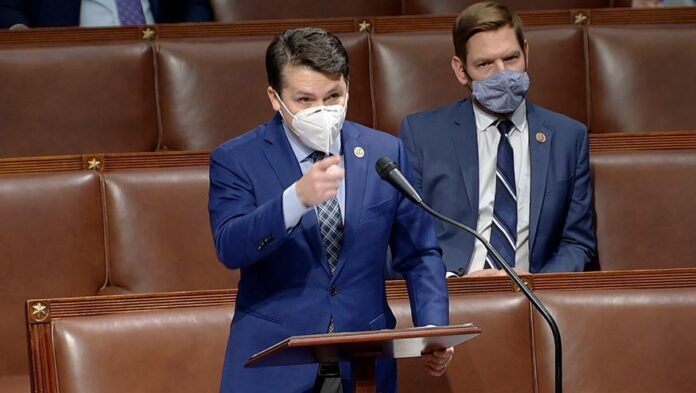 Democrats will do anything they can possibly do to stop Donald Trump from coming back. After 2 failed impeachments, constant hate from the media, illegal spying on his team and potential fraud in the 2020 election, a new effort is underway to stop him from possibly progressing as Speaker of the House next year.

In reporting from the Conservative Brief and Newsmax this week, Democrats have introduced a new bill specifically targeting the chance of him gaining entry into the position. Democratic Congressman Brendan Boyle introduced a new bill called the MEMBERS act. The name stands for Mandating that an Elected Member Be an Essential Requirement for Speakership. In an act of fear towards the new prospect, he created the MEMBERS act to prevent any chance of Trump becoming the next Speaker.

Boyle said about the MEMBERS act that, “The speaker of the U.S. House is second in the United States presidential line of succession. That Donald Trump’s name would even be tossed around as a potential speaker in the people’s house, should serve as an alarm bell that our current requirements need to be amended in the name of protecting our nation and our democracy.”

He continued saying that, “This legislation would establish that mandate in very clear and direct language, and it would serve as a check against those who would seek to undermine and derogate the authority and responsibilities of the speaker’s office.”

Rather than defend the capabilities of the position, the new legislation would actually limit the intended purpose that the position serves. It will attempt to maintain further current Democratic control and reduce the bipartisan nature of its intended purpose.

In a recent interview with radio host Wayne Allen Root with Donald Trump, the idea was suggested, sparking the perceived need for the bill’s creation by Democrats.

Root said to Trump that, “Why not, instead of waiting for 2024, and I’m hoping you’ll run in 2024, but why not run in 2022 for the United States Congress? A House seat in Florida. Win big. Lead us to a dramatic landslide victory. Take the House by 50 seats. Then you become the Speaker of the House, lead the impeachment of Biden and start criminal investigations against Biden. You’ll wipe him out for this last two years.”

To this, Trump responded, “That’s so interesting. You know, it’s very interesting.” It seemed as if the former President enjoyed the thought and was considering its potential.

Jason Miller, former Trump aide and creator of the GETTR app, has stated in the past that Trump had “zero desire to be speaker.” The recent interview suggests otherwise, and the possibility certainly exists that Trump could be changing his mind on the matter.

The current Speaker of the House is Democrat Nancy Pelosi. In my personal opinion, it would be wonderful to see Donald Trump take her position there. It would be an inspiring sight to behold for the people of America. Regardless, election audits are still happening even though relevant information on its progression is difficult to come by. There is potential that the election could be overturned and that Donald Trump could still be President sooner than later. But that seems like a farfetched notion in itself looking at how the courts have handled it all so far. The courts continue to reject any efforts to move forward without properly looking at the evidence.

The Biden administration crafted the “Big Lie” rhetoric that they use specifically to ridicule and minimize all efforts of anyone to question the 2020 election. Actions to audit the data are still occurring in multiple states. Just last week, analysis of ballot imaging in Georgia showed provable fraud by the Election Integrity Group. At the same time as a hearing on the Arizona election audit in Maricopa county, Democrats launched their own probe into the efforts of the election audit itself. These efforts, in just the past week, have caused states and counties to launch their own additional election audit requests, from Texas to Wisconsin and even in North Carolina. But requests and efforts continue to be fought against by the courts and rhetoric from fearful Democrats.

Yes, Donald Trump might run to attempt to become Speaker of the House. That may be a good idea if nothing else happens. But honestly, I still wonder what would happen if there was actually widespread evidence of election fraud? Not in a conspiratorial sense, but in a revelation of true hard data discovered? It wouldn’t be the first time Trump was right in the face of mass doubt. Would the system be allowed to correct itself if failures were uncovered? Could Trump actually have won the 2020 election? It’s not impossible.

No matter if it was Biden or Trump who won, myself and many other Americans would just like to know the real truth of the matter. If Democrats are so confident in their vote count, why does the endless fear mongering still exist? All this fear, hate, division and suppression of information sure does seem a bit suspicious, even still to this day. I do not know either way and, hopefully, only continual effort by caring and capable Americans over time will tell.