Meanwhile millions of Americans anxiously wait for a dose... 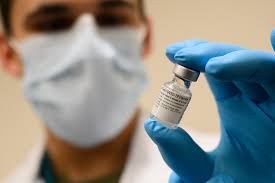 While millions of Americans anxiously wait for their Covid-19 vaccine shot, the Biden administration is giving suspected terrorists at Guantánamo Bay doses of the vaccine.

“The Pentagon will offer coronavirus vaccinations to inmates at Guantanamo Bay Naval Base in Cuba by as soon as next week,” according to a Fox News report. “The 40 prisoners at the Guantanamo Bay military prison will be offered vaccines ‘on a voluntary basis’ because consent is required to administer a treatment that has yet to receive full FDA approval.”

The New York Times reported that the suspected terrorirsts, including Khalid Sheikh Mohammed, who has bragged about his role in the 9/11 attacks, will receive a vaccine “possibly starting next week, according to a prosecutor in the case against five prisoners accused of conspiring in the attacks of Sept. 11, 2001.”

“The prosecutor, Clayton G. Trivett Jr., wrote to defense lawyers on Thursday ‘that an official in the Pentagon has just signed a memo approving the delivery of the Covid-19 vaccine to the detainee population in Guantánamo,’” The New York Times also said.

Given that some of the current detainee population represent the most difficult and dangerous cases from among those historically detained at the facility, there is significant reason for concern regarding their reengagement in hostilities should they have the opportunity. … Section 3 of Executive Order 13492 of January 22, 2009 (Review and Disposition of Individuals Detained at the Guantánamo Bay Naval Base and Closure of Detention Facilities), ordering the closure of detention facilities at U.S. Naval Station Guantánamo Bay, is hereby revoked.”

During his 2018 State of the Union address, Trump further explained:

“Terrorists who do things like place bombs in civilian hospitals are evil. When possible, we annihilate them. When necessary, we must be able to detain and question them. But we must be clear: Terrorists are not merely criminals. They are unlawful enemy combatants. And when captured overseas, they should be treated like the terrorists they are.

In the past, we have foolishly released hundreds of dangerous terrorists, only to meet them again on the battlefield – including the ISIS leader, al-Baghdadi. So today, I am keeping another promise. I just signed an order directing Secretary Mattis to reexamine our military detention policy and to keep open the detention facilities at Guantánamo Bay.

I am also asking the Congress to ensure that, in the fight against ISIS and al-Qa’ida, we continue to have all necessary power to detain terrorists – wherever we chase them down.”

Did Joe Biden Just Forget He Is The President?