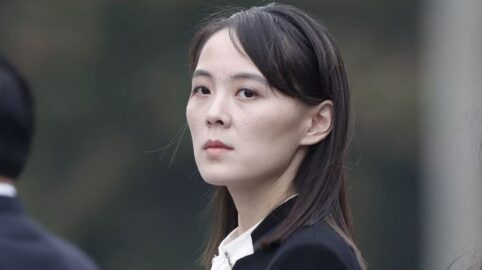 Kim Yo-jong, sister of communist dictator Kim Jong-un and a prominent North Korean politician, published a “media statement” threatening President Joe Biden not to “cause a stink” unless he wanted to suffer sleepless nights.

The statement did not call out Biden by name, but it acknowledged the “new U.S. administration.”

“We take this opportunity to warn the new U.S. administration trying hard to give off powder smell in our land,” the statement said. “If it wants to sleep in peace for coming four years, it had better refrain from causing a stink at its first step.”

“I heard the news that the south [sic] Korean authorities, who had long been suffering from stress in a fix, launched a war game against our Republic on Mar. 8,” Kim wrote. “In other words, they dared to send us a serious challenge. It seems as if they are capable of dealing with the consequences to be entailed by the war drill started despite our entirely just demand and all the fellow countrymen’s unanimous protest and condemnation.”

Secretary of State Antony Blinken is currently visiting Japan and South Korea. He will also be meeting with Chinese officials in Alaska. Blinken plans to discuss tensions with North Korea with all three countries.

North and South Korea — and their respective allies, the China and the United States — are technically at war. The Korean War, whose active hostilities ended in 1953, never ended through a peace treaty.

“It seems that they were all born with stupidity and have become the dumb and deaf bereft of judgment as they always sit on the fence,” Kim wrote of South Koreans. “They are not ashamed of remaining ignorant of the fact that we are not taken in by their nonsense coating mad dog with sheepskin.”

Kim ended her statement by announcing Pyongyang, the North Korean capital, is considering getting rid of “the Committee for the Peaceful Reunification of the Country,” which serves to facilitate dialogue with Seoul, the South Korean capital.

Kim Jong-un has recently given his sister the responsibility of dealing with the punishment for the South, issuing statements on behalf of his regime filled with threats.

South Korea responded to Kim’s statement, saying it is “regrettable.”

“As we’ve repeated, the Korea-U.S. combined exercise is a command post exercise which has been conducted on a regular basis and is defensive in nature,” Defense Ministry spokesperson Boo Seung-chan told reporters. “Our stance is that North Korea should take a flexible stance, such as responding to our dialogue offer, for the establishment of permanent and solid peace on the Korean Peninsula.”