He faces over two dozen charges 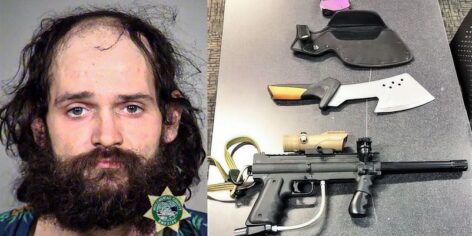 Rangers from the Portland Parks and Recreation department were threatened by an Antifa protester carrying an axe and a paintball gun in downtown Portland. The man initially assaulted a bicyclist. He was arrested for multiple violent crimes, released, and then arrested again within 48 hours.

According to the Portland Police, one man was riding his bike in Chapman Square Park in downtown when Graves suddenly opened fire with his paintball gun. He struck the man, causing an injury. Graves also allegedly threatened to kill park rangers and later waved around an axe at them.

Graves is currently out on bail.
Graves is originally from Louisiana. He moved to the Pacific Northwest in July 2020, where he has since been a regular at BLM-Antifa protests and riots in both Seattle and Portland. His Twitter account shows his history of communication with Antifa groups in Portland to “defend” illegal homeless encampments from being cleared. He was charged with felony second-degree assault and menacing at the beginning of the year, but the case was later dropped.

Two days after his arrest on Saturday, Graves returned to Chapman Square, violating the exclusion order issued against him. On Monday, he was arrested again and cited for second-degree criminal trespass. However, he was not booked to jail.
The Multnomah County District Attorney’s Office has a policy of not prosecuting crimes related to a protest, so one count of reckless endangering of another person and two county of possession of a weapon in a park have been dismissed.
His indictment is scheduled for June 2.
Graves is back on Twitter mocking Portland Police. “Chuds taunting us…” he tweeted Sunday. “F— with me.”
YOU MIGHT LIKE