Why Nursing Home Staff Are Not Getting Vaccinated 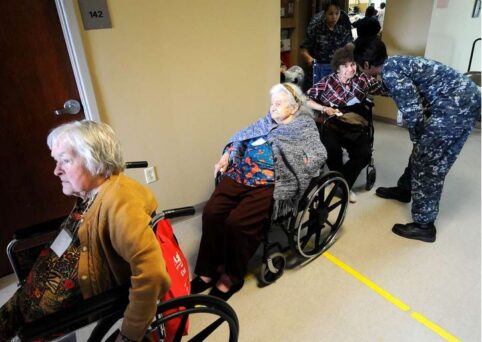 Up to 50% of nursing home staff in the United States have not received the COVID vaccine despite a federal pharmacy partnership that delivered roughly 8 million doses to more than 63,000 nursing homes and other long-term-care facilities.

In states like Arkansas, West Virginia, and South Dakota, that percentage falls to less than 33%.

“We were disappointed, but I don’t think anyone was shocked to see the low uptake,” says Ruth Link-Gelles, head of the federal initiative. “There is a stubbornly large portion of the population that really doesn’t want to get vaccinated, and we have a lot of work to do generally and in this community in particular.”

In some cases, staff members’ refusal to get vaccinated has caused breakouts and slowed efforts to reopen facilities to visitors.

“I was angry,” says Janet Caldwell, who was told she couldn’t see her 87-year-old mother due to an outbreak among nursing home staff. “I felt just totally hopeless that this was just going to continue and it was just never going to end.”

While most nursing home residents have welcomed the COVID vaccine, the people caring for them have not.

“[The vaccine] was developed at a time when there was a lot of mistrust in the science,” admits Julia Liu, a certified nursing assistant who works in Portland, Oregon. “It felt like we didn’t have enough public health information on how sound everything was.”

Furthermore, COVID breakouts at nursing homes can lead to neglect when facilities that are already short-staffed are forced to operate with even fewer employees.

“I consider it to be a very, very dangerous scenario in that so few employees are willing to be vaccinated,” says Martha Deaver, an advocate for nursing home residents and their families. “I’ve been called by hundreds of family members who are appalled that they’re getting calls every day about reinforcements or more infections or being told, ‘Well, we were going to start allowing visitation, but now another employee has been infected,’ over and over again for months.”

Polls suggest this trend is changing as more people receive the vaccine.

According to the latest surveys, staff members’ willingness to get vaccinated has nearly doubled since December and is now estimated at 62%. But with the federal initiative to bring vaccines to nursing homes about to end, it will be up to the states to decide if and how to vaccinate staff members.

Through its #GetVaccinated campaign, the American Health Care Association aims to vaccinate 75% of nursing home employees by the end of June.

“It’s really important that we give staff, residents, and family members the space and opportunity to ask their questions and hear their concerns – especially those within ethnic groups and racial identities who may have fears given historical trauma,” explains spokeswoman Cristina Crawford. “We must listen and then thoughtfully dispel myths and assure doubts.”

*The data above reflects vaccination rates from the federal pharmacy partnership and does not include individuals who may have received a COVID vaccine from another source.